The MSZ-009M Mega Zeta is a variant of the MSZ-009 Prototype ZZ Gundam that appeared in the manga Mobile Suit Vs. Giant God of Legend: Gigantis' Counterattack. The unit was designed by Yuuichi Hasegawa and based on the original Gundam ZZ design by Makoto Kobayashi, featuring a longer head mounted High Mega Cannon.

The Mega Zeta is a two seated version of the ZZ Gundam developed by the Earth Federation instead of Anaheim Electronics. While physically resembling the powerful ZZ Gundam, it has brand new additions to its armaments. One of its oddest additions, is the Psycommu Hands which function similarly to the MSN-02 Zeong's psycommu weapons, although it is more like classic Rocket Punch attacks seen with Super Robots such as Mazinger-Z and GaoGaiGar.

In the manga, the Mega Zeta, although powerful, performed poorly for most of its battles. It requires two pilots to perform at its full potential, but as Judau went inside Gigantis to rescue Mineva Lao Zabi, Amuro was forced to handle the entire system by himself.

This unit is not considered part of the official Universal Century timeline.[2]

The MSZ-009M Mega Zeta makes its first appearance docked in the Juptiris II. When Amuro Ray confronted Judau Ashta over the existence of the mysterious mecha Zeon remnants were digging up, the young Newtype agreed to join him in stopping them. This however failed when Mineva Lao Zabi's fear awakened the mecha, the Gigantis. The powerful mecha then fought the Mega Zeta to prevent the monstrous machine from destroying the universe. 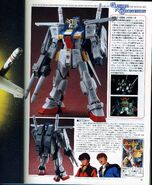 Retrieved from "https://gundam.fandom.com/wiki/MSZ-009M_Mega_Zeta?oldid=418749"
Community content is available under CC-BY-SA unless otherwise noted.