The MSZ-008 ZII (aka Z-Two) is a prototype transformable attack-use mobile suit. It is featured in the original design series Zeta Gundam Mobile Suit Variations and various other works. It was originally designed by Kazumi Fujita.

Sometimes pronounced as "Zettsu" (ゼッツー, "Zettsu"?) instead of "Zeta-Two", the ZII was intended to be the successor to the MSZ-006 Zeta Gundam. It uses a simplified frame similar to that of the MSA-005 Methuss as the Zeta Gundam's frame was deemed too complicated. This also has the effect of making it easier to produce and pilot. The machine focuses on space use, thus the ZII's MA mode, which is called Waverider mode for convenience, lacks its predecessor's ability of atmospheric re-entry and flight on Earth. However, this mode has greater acceleration and maneuverability than that of the Zeta Gundam. The ZII is armed with a pair of beam sabers and a Mega Beam Rifle, which has firepower equal to that of the Ζeta Gundam's Hyper Mega Launcher. It also lacks the bio-sensor which is featured in the Ζeta Gundam and its later successor, the MSZ-010 ΖΖ Gundam.

The beam saber is a small device held in the mobile suit's hands when operated and is powered by a rechargeable energy capacitor. It is capable of cutting through any metal not treated with anti-beam coating. The ZII has two beam sabers stored in an unknown location.

The same handheld beam rifle as the one used by the Zeta Gundam, it is powered by a replaceable E-pac. The beam rifle is also capable of emitting a beam saber from its barrel, allowing the ZII to use it as melee weapon when needed.

The same weapon as used by the MSN-00100 Hyaku Shiki, this projectile-firing bazooka is originally designed to fire adhesive rounds which immobilize enemy machines rather than destroying them outright. However, it can also fire several different types of ammunition, and is normally used with conventional explosive shells. The ZII had two clay bazookas stored on its backpack.

The ZII's most distinctive weapon, the Mega Beam Rifle is a long-barreled, handheld weapon. It can achieve output comparable to the Hyper Mega Launcher by connecting it directly to all the ZII's generators, which can only be done in waverider mode. Like the beam rifle, the Mega Beam Rifle can also double as a beam saber.

Anaheim Electronics constructed one ZII unit before the design team was requested to place priority on the MSZ-010 ΖΖ Gundam for the A.E.U.G.. The ZII was assigned to former A.E.U.G. Assault Squadron Commander Kei Kirishima during the events of the First Neo Zeon War to capture the asteroid base Axis. After the war, the unit was put into storage by Anaheim and its concept was subsequently used as the basis for the development of the RGZ-95 ReZEL.

In U.C. 0090, Earth Federation Forces pilot Travis Kirkland acquired the ZII from Anaheim and painted it in similar colors used by the RX-79［G］SW Slave Wraith. Piloting the ZII, Travis went searching for his son, Vincent Gleissner, before encountering remnants of the Glemy Faction.

A modified ZII with a visor in the vein of the MSZ-010A1 Theta Plus instead of the twin-eye camera and more weapons, including an added shield and a modified Mega Beam Rifle, was seen alongside the Federation forces at Olympus in Mobile Suit Gundam Walpurgis. It fought against the AGX-11 Over.on and tried to ram it, but the attack failed. It later retreated when the AMX-114 Demeter lured and engaged the Over.on outside the colony. 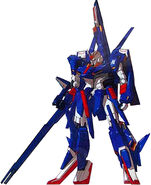 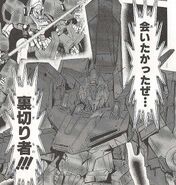 As seen on Mirage of Zeon manga 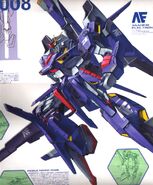 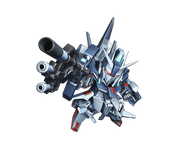 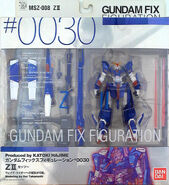 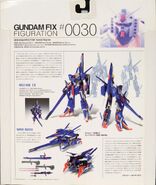 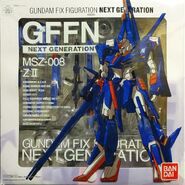 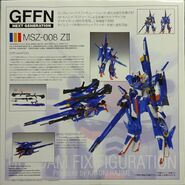 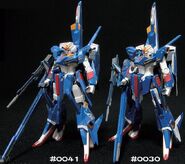 Information from the data book of Mobile Suit Gundam Side Story: Missing Link