Otherwise, all the regular armaments and systems of the Zeta Gundam are retained.

According to the Master Archive Mobile Suit MSZ-006 Z Gundam, this variant appeared around November U.C 0087, during the time when the Zeta Gundam was in Karaba possession (between the assault on Kilimanjaro and Char Aznable's speech in Dakar). Two sets of Flying Armor was tested during this period: The FXA-01K Wave Shooter, constructed based on data supplied by Anaheim; and the variable-geometry FXA-01K-VW which was apparently the basis for the wings of the MSZ-006A1 Zeta Plus A1. The latter showed good results during test flights, but was never used in combat.[2]

In the Mobile Suit Zeta Gundam Define manga, Kamille piloted the unit when he engaged the mobile suits of the Garuda-class Sudori. When the said aircraft attempted a kamikaze on the Audhumla, Four Murasame sacrificed herself to prevent it by crashing the MRX-009 Psycho Gundam into the Sudori. 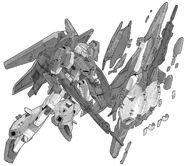 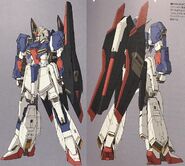 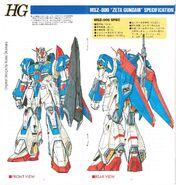 Retrieved from "https://gundam.fandom.com/wiki/MSZ-006_Zeta_Gundam_(Wave_Shooter_Equipment_Type)?oldid=465267"
Community content is available under CC-BY-SA unless otherwise noted.