Start a Wiki
This article is about the mobile suit. For the anime named after this suit, see Mobile Suit Zeta Gundam.

The Zeta Gundam is a high-performance, next-generation MS developed by Anaheim Electronics in partnership with the AEUG as part of the "Project Zeta". This project aims to develop a transformable mobile suit capable of operating in space and on earth, but it stagnated due to problems with the strength of the movable frame. Progress was later made when the Anaheim Electronics studied the movable frame of the RX-178 Gundam Mk-II units stolen by AEUG from the Titans. The completed Zeta Gundam also incorporated design ideas from the AEUG's Newtype pilot, Kamille Bidan, who served as the mobile suit's first main pilot.

The main feature of the Zeta Gundam is its ability to instantly transform into a streamlined Waverider mode, which can fly at high speed in space as well as in the atmosphere. The Zeta Gundam can also function as a sub-flight system in this mode, carrying another mobile suit on its top surface. Furthermore, this mode also allows the Zeta Gundam to ride the shockwaves of atmospheric re-entry, thus it can enter the atmosphere without the use of the Ballute System, a bowl-shaped balloon parachute that protects a mobile suit from the friction heat of atmospheric entry. This atmospheric re-entry capability is thanks to the incorporation of the Flying Armor into the mobile suit's back (bottom in waverider mode), which is developed using the data of the Gundam Mk-II's FXA-00 Flying Armor.

The Zeta Gundam is armored with the new lightweight Gundarium Gamma alloy, and has a variety of weaponry that includes two head-mounted vulcan guns, two beam sabers stored in the side armor that function as beam guns in Waverider mode, two forearm-mounted grenade launchers, a beam rifle with retractable barrel, and a shield. When higher firepower is required, it can use the powerful hyper mega launcher. The Zeta Gundam is also one of the first mobile suit to use the Bio-Sensor, a variant of the Psycommu system that allows a Newtype pilot to more easily interface with his mobile suit via mental commands.

The Zeta Gundam is said to have received various upgrades from its initial model, such as the Initial Model + Wave Shooter, mid-model (major upgrade done in December UC 0087, most notable change being the rear skirt thrusters and addition of forearm grenade hatches) and the late model (final upgrade made in March UC 0088 consisting of Zeta Plus parts).[1]

The basic armament of many mobile suits, a pair are mounted on the Zeta Gundam's head and loaded with 600 rounds. The Vulcan Guns are mainly for intercepting incoming missiles/rockets, destroying mobile suit sensors, and engaging lightly-armored vehicles. They are operable in mobile suit mode only.

A Grappling Wire can be optionally equipped in place of the grenade launchers' explosive warheads. It is mainly used to immobilize enemy units when the pilot wishes not to inflict damage to the target.

The Zeta Gundam's primary handheld ranged weapon, this beam rifle is longer than most models employed by other mobile suits in the same era and is powered by a replaceable e-pac, with a power rating of 5.7 MW. It can also emit a beam blade from its barrel, turning into a long beam saber for close combat use. The beam rifle is operable in mobile suit mode as well as waverider mode, where it is mounted at the top surface and its barrel is retracted. In mobile suit mode, the rifle can be stored on the back or on the side of the forearm when not in use.

When the Zeta Gundam needs greater firepower than its beam rifle can deliver, it can be equipped with the hyper mega launcher with a power rating of 8.3 MW. This powerful weapon is powered by an internal compact generator and is developed from the Hyaku Shiki's mega bazooka launcher. Like the beam rifle, it can emit a beam blade from its barrel, turning into a long beam saber. The hyper mega launcher is usable in mobile suit mode and waverider mode, where it is mounted below the shield.

A standard defensive feature of most mobile suits is a shield, and Zeta Gundam has an unique shield that also serves as the nose unit in waverider mode. A thick piece of extra armor, the shield also has an anti-beam coating to defend against beam attacks, but the coating gets worn with each hit until rendered useless. In the movies, the shield is armed with a pair of grenade launchers at the back.

A technological variant of the Psycommu system developed by Anaheim Electronics. Although its full capabilities are unknown, its primary purpose is to allow a Newtype pilot to more easily interface with his mobile suit via mental commands. The bio-sensor could also have a rather surprising side effect when the pilot is mentally and emotionally focused enough (usually when angry or upset) to cause the bio-sensor to amplify the power, speed, and strength of the mobile suit for a short period of time.

This device sprays a sticky sealant, similar to the wall film used to mend breaches in warship hulls. This substance can be used to seal ruptures in spacecraft and space colony exteriors. By the time of the Gryps Conflict, most mobile suits have sealant launchers built into their fingers, as well as utility devices like signal flare launchers, dummy dispensers, and fire extinguishers.

After losing its head in an earlier battle against the AMX-103 Hamma Hamma and AMX-104 R-Jarja, the Zeta Gundam was hastily repaired by Iino Abbav using an old Zaku II head (due to a lack of spare parts) so that it can assist the ZZ Gundam in battle. This Zaku II head was salvaged by Judau Ashta in between the battles from an asteroid field and towed back to the Argama. While this "Zeta Zaku" was operational, the old Zaku II head caused the cockpit screen to revert to the old, non-360 degree display, leaving Iino vulnerable to enemies that could sneak up to him from areas he could not see.

Replacing the Gundam Mk-II as his personal Mobile Suit, Kamille obtained the Zeta Gundam after returning to space from the Hong Kong incident involving Four Murasame. Screaming into battle, this sleek convertible Mobile Suit took all of the Titans' forces by surprise with its incredible performance and attack potential. Kamille led many successful missions against the Titans and the A.E.U.G. turned the tide of the war. The Zeta was responsible for battling and ultimately killing Titans leader Paptimus Scirocco, besting his powerful mobile suit, the PMX-003 The O.

A.E.U.G. pilot Fa Yuiry later recovered the Zeta Gundam along with Kamille, who was rendered in a vegetative state after a final psychic attack by Scirocco. After undergoing repairs, the Newtype Judau Ashta became its principal pilot while the newer MSZ-010 ΖΖ Gundam was under construction by Anaheim Electronics. During a battle with Mashymre Cello's AMX-103 Hamma Hamma and Chara Soon's AMX-104 R-Jarja, the Zeta Gundam's head was destroyed by the Hamma Hamma's shield beam gun. Due to a shortage of spare parts aboard the Argama, the Zeta Gundam was temporarily fitted with a salvaged MS-06F Zaku II's head, thus earning the nickname "Zeta Zaku". The temporary fix by Iino Abbav worked, however the cockpit screen reverted to an old-fashioned display, as the Zaku II head was not built for the 360-degree panoramic cockpit.

When Judau received the ZZ Gundam, Roux Louka became the Zeta Gundam's designated pilot, using it to great success during the war against Neo Zeon. Judau would occasionally trade mobile suits with Roux, as the Zeta Gundam was better suited for speed and mobility. The Zeta Gundam operated until its destruction at the end of the First Neo Zeon War, crippled by Ple Two's monstrous NZ-000 Queen Mansa, although the Zeta got in one final crippling shot before being abandoned.

In Char's Counterattack - High Streamer, the unit was recovered after the end of the First Neo Zeon War and concealed along with the MSN-00100 Hyaku Shiki by Federation Forces. According to Anaheim Journal, the Zeta Gundam was restored exclusively for the U.C. 00100 ceremony to perform flight demonstrations. In MS Graphica, a Zeta Gundam replica constructed by Anaheim Electronics is deployed for a special mission to combat the EARM terrorist group mobile armor, Leiurus, in U.C. 0097. This particular unit was piloted by freelance mercenary "Johnny" (callsign "Lightning").

Head Unit (Front and Side Views) 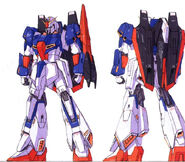 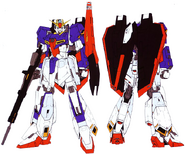 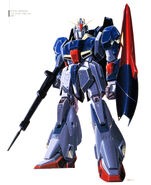 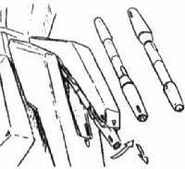 On the cover of Mechanical Edition Vol. 2

Zeta and its Waverider mode, Illustration by Naochika Morishita 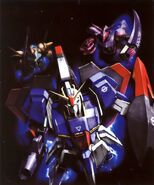 Outside of a space colony 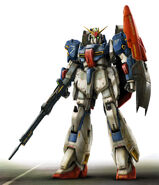 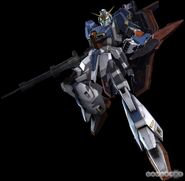 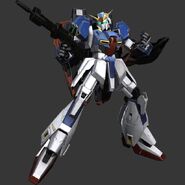 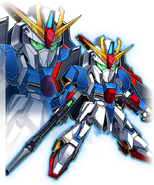 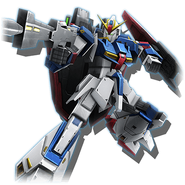 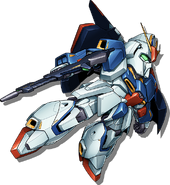 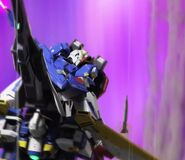 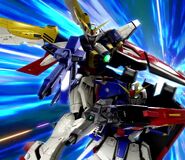 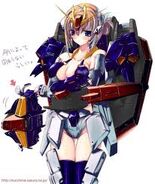 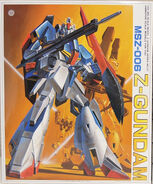 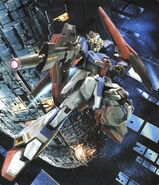 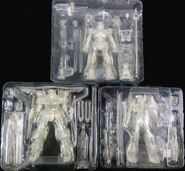 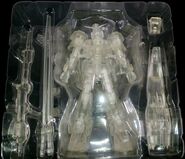 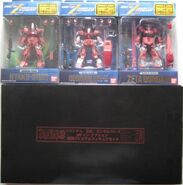 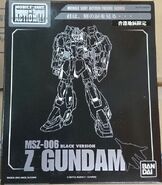 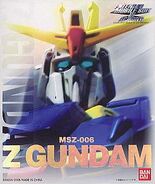 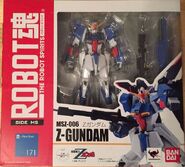 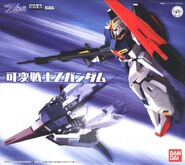 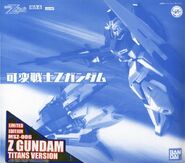 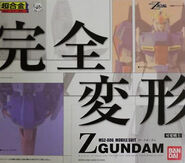 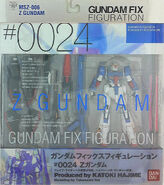 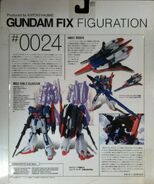 Retrieved from "https://gundam.fandom.com/wiki/MSZ-006_Zeta_Gundam?oldid=455897"
Community content is available under CC-BY-SA unless otherwise noted.