The MSZ-006LGT Lightning Zeta Gundam is a Gunpla from Gundam Build Fighters Try. Based on the MSZ-006 Zeta Gundam, it is built and piloted by Yuuma Kousaka.

This customized Zeta Gundam Gunpla is Yuuma's winning entry for the Meijin Cup Open Course (an artistic Gunpla competition), and according to Meguta Yasu, it seems to be almost entirely scratch-built. Besides the Gunpla's artistic merit, it also displays high combat capabilities during Gunpla Battle. The transformation ability of the original Zeta Gundam has been removed in favor of the Phoenix Burst System, a weapon system whereby the back binders are attached to the arms and used in conjunction with the handheld mega particle cannon equipped shield. To compensate for the loss of the transformation system, Yuuma increased the Lightning Zeta's base specs and this allows the non-transformable unit to carry out high speed movements. Other weapons include a beam rifle and a pair of beam blades emitted from the wings of the back binders.

A pair of beam blades can be emitted from the wings of the back binders. They are deployed when the binders are attached to the forearms and have high cutting power due to their large size.

Mounted on the left forearm, it is the suit's main defensive equipment and can also serve as a weapon due to a mega particle cannon installed in the tip. Like the beam rifle, the shield can also be attached to the back and used as a beam cannon when the back binders are attached to the arms. With the beam rifle and shield at the back, and the beam blades on the arm-mounted binders activated, the Lightning Zeta Gundam can attack enemy units in all ranges easily and without any delay due to changing weapons.

A large weapon system created when the back binders are attached to the arms and used in conjunction with the shield which is now held by both hands. Through the combination of the binders' beam blades and the shield's mega particle cannon, the system can launch a powerful beam in the form of a pink phoenix. Known as the 'Phoenix Burst', it is Yuuma's replication of Try Burning Gundam's Houou Haoh-Ken. Although it is weaker in power than the Houou Haoh-Ken, it is still the Lightning Zeta Gundam's strongest attack.

For this suit's history, please go to Yuuma Kousaka's page. 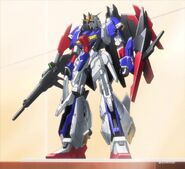 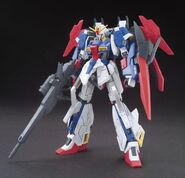 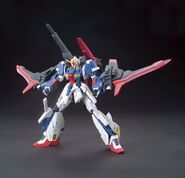