The MSZ-006AZ Amazing Z Gundam is a Gunpla from Hobby Hobby Imaging Builders. It is built and piloted by Meijin Kawaguchi III.

After returning from his long overseas tour, Meijin Kawaguchi III overhauled the amazon.co.jp A-Z Gundam with a grateful heart, creating the Amazing Z Gundam. The Gunpla's performance remains unchanged, only measures were taken to relieve it of the accumulated stress it had sustained from the continuous battling. An example of this is the restoring of the Gunpla's structural strength.

While its red color scheme reminds one of the Meijin's earlier moniker of 'The Crimson Comet', named after the phenomenon which sometimes occurs when the Meijin's Gunpla become red due to the surrounding Plavsky Particles being compressed during high-speed movements, this is not the Meijin's intention. Instead, the color scheme is because the Meijin felt it is the least Gundam-type colors due to its association with Char Aznable, the greatest rival of RX-78-2 Gundam's pilot, Amuro Ray. It also serves the purpose of reminding him to see the appeal of the Gundams in a different light, unhindered by the existing stereotypes.

The same pair of portable firearms as used by the A-Z Gundam. When held in hands, they can be used for suppressive fire over a wide range, and via combination in a bottom-to-bottom manner, they become a powerful final battle use weapon that is directly powered by the generator.

Through connecting the twin hyper mega launchers separately to the flying boosters on the Gunpla's back, a long distance firing mode with maximum firepower is achieved. In Wave Rider mode, it acts as the nose of the Gunpla and can be fired as well.

Mounted on the left forearm, it is for both offense and defense. Though its defense area is limited, regular attacks will not be able to leave a fine scratch on its mirror finish surface thanks to the anti-particle paint. A large beam saber can be generated from the shield's tip, and when it is used as a ramming weapon during Wave Rider mode.

The Amazing Z Gundam has four Vulcan guns, two on the shoulders and two below the chest vents.

The Amazing Z Gundam was created by the Meijin Kawaguchi III some time after his return from his long overseas tour. During an interview with a writer from a hobby magazine, he explained why he created the Gunpla and the reason behind its color scheme. 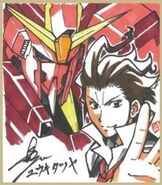