The MSZ-006-P2/3C Zeta Gundam P2/3C Type (also "Red Zeta") is a variant of the MSZ-006 Zeta Gundam that appears in the Gundam Evolve series of short films. It is piloted by Yurii Ajissah.

Unlike the original Zeta Gundam, Red Zeta's armor sports a heavily 'spiked' look. Equipped with the Psyco Neutralizer, its cockpit can change from a standard panoramic cockpit and linear seat by retracting the seat and manual controls. This leaves the pilot free-standing (or floating, in zero-g environments), with their head in a hollow, transparent, hemispherical device, and a number of cables attach from the seat into the back of the pilot's flight suit. In this mode, the movements of the suit follow the pilot's own movements.

The Psyco Neutralizer is actually an advanced model of the Bio-Sensor, allowing the pilot to fully control the MS with precise movement. This system also allows the pilot to psychically interfere with other Newtype weaponry, such as when Yurii managed to take control of the QRX-006 Geminus's arm and used it against the mobile armor. However, the system is highly unstable and can be overloaded by powerful psycowaves. The unit can be equipped with a (colour-matched) single-stage booster system, allowing the Red Zeta to make orbit otherwise unassisted. The Psyco Neutralizer is considered exceptionally advanced for Gryps Conflict-era technology, and as a result, some people question its existence.

Like the original, the Zeta Gundam P2/3C Type has a pair of head-mounted vulcan guns as mid-close range defensive weapons. While they normally do little damage against the armor of a mobile suit, they are useful in intercepting missiles, lightly-armored targets, etc. The vulcan guns are operable in mobile suit mode only.

While most mobile suits uses a beam rifle as their main firearm, the Zeta Gundam P2/3C Type uses a beam pistol instead. Despite its small size, the pistol is powerful enough to destroy an enemy unit with a single shot. It can also emit a beam knife from its barrel, allowing it to be used as a melee weapon.

The beam saber is the standard close-combat melee weapon of many mobile suits. The pair employed by the Zeta Gundam P2/3C Type are stored in the side skirt armor, and are hand carried in use, with a power rating of 0.65 MW. In waverider mode, the beam sabers double as beam guns, partially extending from the storage racks, with a total power rating of 1.3 MW.

A standard defensive feature of most mobile suits is a shield. The Zeta Gundam P2/3C Type's shield also serves as the nose unit in waverider mode.

An advanced model of Bio-sensor System, it allows the pilot to fully control the MS with precise movement and to psychically interfere with other Newtype weaponry. But the instability of this system make its very dangerous to the users.

After the Gryps Conflict, three Zeta Gundam was made and assigned to AEUG for wiping out Titans remnants. The Zeta Gundam P2/3C Type was piloted by a young Newtype girl named Yurii Ajissah (Codename "Red Snake"), who holds her squadron leader, White Unicorn, in high regard. The unit's original pilot was named Johnny Ridden, but he was replaced by Yurii since it required a newtype to operate. By fully mastering the power of Psyco Neutralizer system, Yurii managed to destroy the monstrous QRX-006 Geminus, although the Red Zeta was also destroyed in the process. 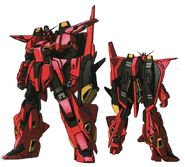