The MSZ-006-3A Zeta Gundam 3A Type (aka "White Zeta") is a variant of the MSZ-006 Zeta Gundam and initially appears in the 2001 short CGI film Gundam Neo Experience 0087: Green Divers and later in the series of short anime films Gundam Evolve.

Being the third Zeta Gundam produced, it is usually referred to as "Zeta Unit Three", or "White Zeta" because of its unique color scheme. It is almost identical to its predecessor, retaining unique features such as generator in the legs (because of the high energy requirement of the leg thrusters calls for a direct link to the generator), or incorporating Binders in the Waverider form to help with the MS's AMBAC capability. Unlike the original Zeta Gundam, the Zeta Gundam 3A Type is not equipped with a Bio-Sensor and it is also specifically tuned for its pilot, Amuro Ray.

The Zeta Gundam 3A is equipped with a pair of 60mm Vulcan Gun located in its head. These shell firing weapons have a high rate of fire but little power and can't damage the thick armor of a mobile suit, though they can damage lightly armored areas such as the sensors. They are ideal for shooting down small, lightly armored targets such as missiles, small vehicles, etc. The weapon is operable in mobile suit mode only.

Equipped in place of the explosive warheads on the grenade launchers. It is mainly used to immobilize enemy units when the pilot wishes not to inflict damage to the target. The grappling wires can also be useful in performing tight turns in Waverider mode by anchoring them on a nearby surface.

The beam saber is the standard close combat weapon of many MS. The pair employed by the Zeta Gundam 3A are stored in the side armor, hand carried in use, and have a power rating of 0.65 MW. In waverider mode, the beam sabers also double as beam guns, partially extending from the storage racks, with a total power rating of 1.3 MW.

The Zeta Gundam 3A is often outfitted with the same beam rifle as used by the original Zeta Gundam. This weapon is longer than most other rifles employed by other mobile suits in the same era and is powered by a replaceable E-Pac, with a power rating of 5.7 MW. The beam rifle is also capable of emitting a beam saber from its barrel for close combat.

A standard defensive feature of most mobile suits is a shield to stop physical, and beam attacks due to the presence of anti-beam coating. The shield of the Zeta Gundam 3A is the same as the Zeta Gundam's (but with a different paintjob to match the white-purple color scheme), which serves as the nose unit when in Wave Rider mode for aerial maneuverability and to reduce wind resistance, thus increasing speed in flight.

Piloted by Karaba ace Amuro Ray in the later stages of the Gryps Conflict and the First Neo Zeon War, the White Zeta was put use to great success during both wars. Some deny this as merely propaganda, similar to the story of the MSZ-006 Zeta Plus since the unit in question was also stated as an Amuro Type (however, the Master Grade model confirmed the custom Zeta Plus was only tuned to fit Amuro's piloting skills, and it was only used for training new pilots for the A1 type).

It makes a reappearance in episode 9 of Gundam Evolve, which was piloted by squadron leader White Unicorn (who is believed to be the legendary ace Amuro Ray) and battled the QRX-006 Geminus with assistance from other Zeta units, the MSZ-006-P2/3C Zeta Gundam P2/3C Type and the MSZ-006-3B Zeta Gundam 3B Type. 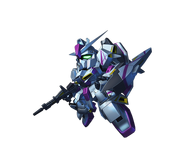 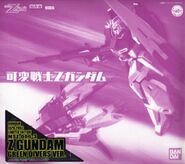