The Zero Shiki is a general purpose prototype mobile suit which is developed from the data obtained on the RMS-099 Rick Dias. The unit shares aesthetics from the Rick Dias as well as some design features seen in the MSN-001 Delta Gundam. The unit's red color mirrors that of the mobile suits used by the legendary Zeon pilot Char Aznable.

On the sides of Zero Shiki's head mounts a pair of 60mm Vulcan Guns. These shell firing weapons have a high-rate of fire, but little power and are generally ineffective against mobile suits; however, they can damage lightly armored areas such as the sensors. They are also ideal for shooting down small, lightly armored targets such as missiles, small vehicles, etc.

The beam saber is a small cylindrical device held in the mobile suit's hands when operated and is powered by a rechargeable energy capacitor. It emits a blade of plasma contained by an I-Field and is capable of cutting through any metal not treated with anti-beam coating. The Zero Shiki has 2 beam sabers stored on the rear-waist armor.

The standard ranged armament of many mobile suits is the beam rifle. The particle beam fired from a rifle can penetrate almost any armor that has not been treated with specific counter-measures.

atmosphere, a bowl-shaped ballute (balloon parachute) deploys to protect it from the friction heat of atmospheric entry. The balloon then detaches, leaving the mobile suit with chest and leg hover units which ease its descent to the ground. If the mobile suit reaches the ground without expending all the fuel in the leg units, these devices can also be used for hovering and high-speed strike missions. The equipment was designed and mass produced between the years UC 0083 and 0087 and is designed to be used by a multitude of different mobile suit models.

One Zero Shiki was put into service by the Anti Earth Union Group during the events of the Gryps Conflict which is piloted by ace pilot Quattro Bajeena. 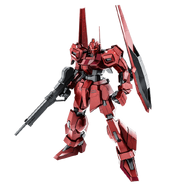 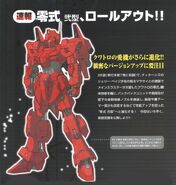 Retrieved from "https://gundam.fandom.com/wiki/MSZ-000_Zero_Shiki?oldid=466885"
Community content is available under CC-BY-SA unless otherwise noted.