The MSW-004 Gundam [Kestrel] is a mobile suit that appears in the Advance of Zeta: The Traitor to Destiny series of light novels. It is piloted by Van Asiliaino.

The MSW-004 Gundam [Kestrel] is a prototype mobile suit developed and built at the Oakland Newtype Lab for use by the Titans.. It was intended to be piloted by the Titans Cyber-Newtype Rossweisse. The mobile suit was originally developed under the name ［Gullinbursti］, but it was damaged and repaired with parts based on the Wagtail. The Kestrel was designed to be a fast and highly maneuverable mobile suit, and featured three generators housed in the main body and legs with high-output thrusters directly connected to them. Because it was originally designed to be used by Newtypes, its high acceleration results in a higher g-force than normal pilots can tolerate. The Kestrel also integrates a special quasi-psycommu system into its frame, nicknamed Shaman Frame. By inputting the data of a pilot's brainwaves into the Kestrel's drive system, the mobile suit becomes much more responsive to the pilot's controlling. Its main camera is the mono-eye sensor on it chest, while the head serves as a decoy.

The Kestrel utilized a Core Block System, which was unusual for its time, as the Gryps Conflict saw accelerated development in variable mobile suit technology. The core block fighter is capable of separating, and primarily functions as the cockpit of the machine. When docked, the engine nacelles of the core fighter act as the Kestrel's main thrusters/backpack. The core block featured an improved main computer to allow high speed transferring of combat data.

Two beam sabers are stored on the Kestrel's backpack. The beam saber rack replaces the wing binders of the ［Gullinbursti］.

The Kestrel is equipped with a specialized high-power beam rifle. While it is the mobile suit's only long-range armament, it is very powerful. Four E-pack cartridges can be stored on the Kestrel's waist, with two on each side.

A beam blade emitter is mounted on each of the Kestrel's shoulders, forearms, knees, and toes, for a total of eight. The beam emitters on the shoulders are mounted on articulated arms and can also function as beam guns. Due to the high generator output of the Kestrel, all of the beam blades are able to be deployed simultaneously. The beam emitters on the forearms also supply power to the Beam Madu

A a small shield attached to the forearm of the Kestrel and connected to the beam emitter. It is equipped with three beam sabers mounted on the front. While the beam sabers are primarily intended to intercept the beam blades of enemy mobile suit's they can also be used to attack.

By the time the MSW-004 was successfully completed, the Titans had already moved their forces to space, leaving behind the unit. The Kestrel was captured intact by the AEUG and continued with testing the prototype on board the Anaheim Electronics (AE) La Vie en Rose-class dock ship, Rosa Gigantia. A high-performance machine, the Kestrel's incredible speed and maneuverability made it suitable only for "strengthened" humans and Cyber-Newtypes with high-G tolerance. As a result, problems arose with finding capable test pilots after a spate of accidents which occurred during testing. These accidents caused the head and other parts of the Kestrel to be damaged, these being replaced with new parts manufactured by AE. Van Asiliaino was selected as the primary pilot for the Kestrel due to his combat performance rating with the MSK-003 Wagtail II and his exceptional high-G tolerance. 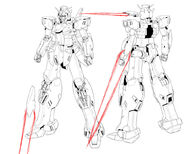 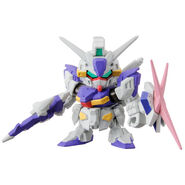