The Full Armor [Kestrel] is the result of the Gundam [Kestrel] being equipped with both the Maneuver Exterior and Armor Exterior parts. The Break Binders compensate for the reduced mobility caused by the Armor Exterior parts, but its propulsion was still judged to be insufficient, so the backpack is equipped with the Kestrel's standard laser rockets rather than the Maneuver Exterior's thermonuclear rocket engine. The missile launcher normally mounted on the left arm of the Armor Exterior has been replaced with two beam sabers.

Two beam sabers are stored on the Kestrel's backpack. The beam saber rack replaces the wing binders of the ［Gullinbursti］. An additional two beam saber are mounted on the left arm, and are deployed while still attached.

Two Break Binders are mounted on each shoulder, and each binder is armed with a beam gun. The Break Binder was originally developed as a wired psycommu weapon but was modified for use by a normal pilot so that it could ejected and guided manually via controls in the cockpit. As a result, only one can be operated at a time.

A high-power beam cannon that is connected to the arm beam emitter and receives power from the Kestrel. The weapon consists of the main body, a mega condenser, and a replaceable barrel. It can be fired continuously for several seconds, but forced cooling is required afterwards. It is also able to adjust the firing angle of the beam by 15 degrees at the barrel. However, the long barrel results in the weapon having an unstable center of gravity.

It was launched shortly after the end of the Gryps Conflict to prevent a nuclear attack by the Titans fleet. 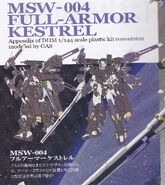