The MSN-X4 Bagwi Doga is a prototype newtype-use mobile suit, it is featured in the manga Under the Gundam: Double-Fake.

The Bagwi Doga was a special suit designed to be used by the Neo Zeon’s Newtype pilots. After deployment of AMX-004G Qubeley Mass Production Type and AMX-015 Geymalk, it was concluded that increasing the number of remote weapons would give diminishing return of fighting power. The Bagwi Doga instead focuses on increasing utilization of each remote weapon unit.

It controls the insect-like "mobile bits" stored inside its torso. The mobile bits are armed with machine guns rather than beam guns and cannot be recharged like previous remote weapons. However, these bits are semi-autonomous and can engage in close combat. Bagwi Doga is also equipped with eight Spoon Bits, but was not seen using them in the manga. Its development was the initial step towards the MSN-03 Jagd Doga. 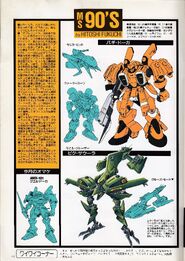