This article is about the mobile suit that would become the MSN-06S Sinanju. For the unit that appears in Mobile Suit Gundam Narrative, see MSN-06S-2 Sinanju Stein.

The MSN-06S Sinanju Stein (aka Sinanju Stein) is a mobile suit featured in the PlayStation 3 video game Mobile Suit Gundam UC and UC-MSV.

Built from the data obtained from both the MSN-04 Sazabi and RX-93 ν Gundam, the Sinanju Stein is developed as part of the Earth Federation Forces reorganization plan known as the "UC Project." It is created by Anaheim Electronics to test the sensitivity and durability of the lightweight and rigid material, the Psycho-Frame, for use in a mobile suit's internal movable frame. The Sinanju Stein is also equipped with a Psycommu system, and the "Intention Automatic System", which functions by using the Psycho-Frame's sensitivity to the pilot's thought-waves to directly affect behavior of the mobile suit.[1] The suit boasts high mobility and features flexible thrusters on its legs and backpack, allowing it to achieve precise movements at high speeds.

The suit was to be operated unmanned to measure the maximum capabilities of the Psycho-Frame, but was actually intended to be used by a certain pilot. Two lines of mobile suits were developed using the Sinanju Stein as a base. These were the RX-0 Unicorn Gundam and the MSN-06S Sinanju. The former was thought to be developed by based on the data of the Sinanju Stein's test. The latter was refurbished using one of two units stolen by the Neo Zeon remnant group, the Sleeves, and had its response levels tunned down as its controls were too sensitive. The other stolen unit was also embellished with the engravings of the Sleeves and deployed in battle over RX-0 Unicorn Gundam 03 Phenex. Stein means "stone" in German and Norwegian, and the Sinanju Stein is referred to as "The stone from which Full Frontal's Sinanju was hewn".

Mounted in the head, the pair of vulcan guns are not very powerful and typically unable to penetrate mobile suit armor. However, they are useful in intercepting missiles/rockets, destroying mobile suit sensors, and engaging lightly-armored targets such as tanks and small aircraft.

A pair of beam sabers are stored in the forearm armor. When in use, the armor lifts up for pulling out the sabers' handles. The beam sabers' beam blades can also be generated and be used as beam tonfas when the armor open ups.

A large beam rifle similar in shape to the one used by the FA-93HWS ν Gundam Heavy Weapons System Type, including the dual sensors above the muzzle.[2] It is powerful enough to destroy a Clop-class cruiser in only a few shots.[3] It also has a fire control system that works in conjunction with the suit's intention automatic system.

The Sinanju Stein's defensive armament, it has similar appearance as the RX-93 ν Gundam's shield.

The shield of the Sinanju Stein is equipped with a Beam Cannon.

Mounted on the back, the pair of tanks increase the amount of fuel the suit can carry, thus increasing its operational flight time. When the fuel is depleted, the tanks can be ejected to decrease mass.

The psycho-frame is a technology that builds the brainwave-to-machine code translator known as Psycommu into the atom-level of the metal frame of a Mobile Suit. This allows a Newtype pilot to mentally connect with their mobile suit's operating system, similar to the bio-sensor, and input commands directly from the mind via brainwaves.

The Sinanju Stein was based upon the MSN-04 Sazabi and RX-93 ν Gundam, it was created by Anaheim Electronics to test the use of Psycho-Frame in a mobile suit's internal movable frame. The resulting data was used by Anaheim to build the RX-0 Unicorn Gundam.

On June 14th, U.C. 0094, two containers, one of which held the Sinanju Stein (the other presumably held the MSN-06S-2 Sinanju Stein), departed from Side 1 for the Anaheim Electronics facility in Granada, carried by the Clop-class cruiser Unkai and escorted by another Clop-class cruiser, the Ra Dels. However, as part of a secret deal between Anaheim, several high-ranking Earth Federation Forces officials, and Neo Zeon remnants, the Unkai's cargo would be transferred to the Neo Zeon remnants under the guise of an attack. Through this, the Federation planned on revitalizing Neo Zeon so they can be swept away as part of the UC Project.

However, Carlos Craig, a rogue agent from the Federation's Central Intelligence Agency, attempted to stop the transfer by leaking the plan to Dakota Winston, the mobile suit squadron leader of Unkai. Together, they boarded a RGM-89S Prototype Stark Jegan and broadcast the truth of the attack to the crew members of both ships. This caused the false attack to escalate into an all-out battle. However, Full Frontal, piloting his custom Geara Doga, managed to break into the Unkai and steal the Sinanju Stein.

Using the new machine, Frontal easily destroyed the Federation mobile suits, including the Prototype Stark Jegan piloted by Craig and Winston. At this point, Frontal received a communication from Alberto Vist (who was at the Granada facility) via laser. Alberto was uneasy about the senseless deaths and complained about how difficult it will be to clean up, but praised Frontal's "performance" as a Cyber Newtype, saying it was expected of someone raised by Monaghan Bakharov.

However, Frontal was apparently offended at this comment, saying that this was not the role he wanted to play. He then turned around and proceeded to sink the Unkai and the Ra Dels. When asked why he did that, Frontal replied to Alberto that he merely helped him with clean up: by killing all witnesses, the secret deal was covered up, leaving behind only the fact that a single mobile suit sank two Clop-class cruisers. Horrified, Alberto asked Frontal just who is he, to which he replied that he is Full Frontal, someone who, just as his name suggests, has nothing to hide. He merely plays the role that people wishes him to play. Alberto mutters, seemingly to himself, "Red Comet...", to which Frontal replies that the idea of being the Red Comet, the second coming of Char Aznable, does not sound bad.

During the events in Mobile Suit Gundam UC MSV Kusabi manga, the stolen Sinanju Stein was test-piloted by Sleeve's Worklach Banham for Zeon weapon's compatibility prior to its conversion into MSN-06S Sinanju. 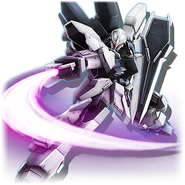