The MSN-04 Sazabi is a mobile suit that appears in Mobile Suit Gundam: Char's Counterattack. It is piloted by Char Aznable.

After Char Aznable returned as the leader of his own Neo Zeon faction in U.C. 0093, he ordered his engineers to create a new mobile suit which would fit his piloting skills and Newtype powers. The result was the MSN-04 Sazabi, which was later built by the Luna-based contractor Anaheim Electronics [1][2]. With an overall height of 25.6 meters, the Sazabi is much bigger than most standard mobile suits, but thanks to the use of lightweight armor materials and a great number of thrusters [3] it is much faster and maneuverable than other suits. The suit is armed with an abdomen-mounted scattering mega particle cannon, a beam shot rifle, a pair of beam sabers stored in the arms and a shield with three missiles as well as a beam tomahawk.

Because Char is a Newtype, the Sazabi was also equipped with six funnels which the pilot could control through his psycowaves via a Psycommu system. The Sazabi was also the first MS to be equipped with the revolutionary new psycoframe cockpit. This system featured microscopic psycommu receiver circuits installed throughout a mobile suit's internal frame and cockpit walls. These tiny circuits amplify and transmit a Newtype pilot's psycowaves, enabling the mobile suit to respond instantaneously to mental commands.

The Sazabi is equipped with a pair of beam sabers, one stored in each forearm for quick deployment in combat. The beam sabers serve as one of two close combat weaponry of the Sazabi and is a beam of plasma contained by an I-field that can cut through any metal alloy.

One of the Sazabi's powerful weapons is its Newtype-use remote weaponry - Funnels. The Sazabi stores six funnels in its backpack-mounted storage pods, each with a power rating of 10.6 MW. Although the Funnels themselves are the same as the ones used in MSN-03 Jagd Doga, Sazabi's Funnel Rack can recharge the Funnels, unlike the ones found on Jagd Doga, which are just regular racks.[4] Char has shown that these funnels can attack at great distances and are ideal for dealing with nuclear missiles.

The Sazabi mounts a scattering mega particle cannon in its waist and it is connected directly to the generator. The mega particle cannon has a power rating of 8.8 MW, and the beam emitted is an unusually wide beam that can destroy multiple mobile suits in a single shot.

The beam shot rifle is a hand-carried ranged beam weapon that was designed to be used by the Sazabi. It is noticeably larger than most other beam rifles, is powered by a rechargeable energy cap, and has a power rating of 10.2 MW. A unique feature of this rifle is that it has two barrels, one for firing normal beam shots and another for firing a scattershot-like beam blasts. The latter is similar to what is fired by a shotgun, the wider beam spreads the damage over a greater area.

The Sazabi is equipped with a shield on its left forearm. The shield mounts three small missiles that can heavily damage a mobile suit, but not a battleship. The shield also holds the storage rack for the Sazabi's beam tomahawk.

Stored on the back of the shield, the beam tomahawk is the Sazabi's most powerful melee weapon and mounts two beam emitters. Taking advantage of the flexibility of the I-field and its ability to shape plasma, the beam tomahawk can either emit a pair of beam axe blades or combine its output to form a single large beam saber.

An external tank used for propellant storage. This extra propellant greatly extends a mobile suit's operating range and enables it to stay in combat longer. When the propellant is consumed, the tank can be discarded to reduce the mobile suit's weight. These tanks use a two-layered construction, with one layer containing propellant, and the other holding extra coolant.

The Psycoframe is a technology that builds the brainwave-to-machine code translator known as Psycommu into the atom-level of the metal frame of a Mobile Suit. This allows a Newtype pilot to control the mobile suit as if it were his/her own body.

A Psycommu is a device connected directly into the user's thoughts, through which the user can manipulate it by using his/her mind. The name derives from psychic and communicator. In essence, a psycommu system works by passively scanning the brainwaves of newtypes, amplifying them in order to send the brainwave signal out long distances, and then translating these brainwaves into raw machine codes upon being received by the selected object. Since brainwaves are not affected by the radio interference property of Minovsky particles, at first it was mainly used to mentally control remote weapons, usually mounted with a single beam gun. This enabled the resurrection of BVR engagements, with bits and funnels being the first weapons able to engage targets without visual contact since the development of the Minovsky particle. Later on, the psycommu system would also be used to increase response times.

After Char Aznable, the legendary Zeon ace, reappears in the early U.C. 0090s and establishes the second Neo Zeon movement, Char commissioned Anaheim Electronics to produce a custom-designed mobile suit specifically for his Newtype abilities and superb piloting skills. Painted in his trademark red color scheme and insignia. The Sazabi was used by Char to personally lead the Neo Zeon forces in the battle against the Earth Federation's Londo Bell Task Force and especially against his old archrival Amuro Ray and his RX-93 ν Gundam, which was also equipped with a psycoframe system. However, it would be more accurate to say he led defensive actions against Londo Bell. As Char's Neo Zeon did not have the manpower or the resources to fight extensive battles to claim territory, they instead relied on the strategy of accelerating asteroids and dropping them on the Earth to create a nuclear winter. Londo Bell would launch its forces and attempt to destroy the asteroids, but they were aggressively guarded by the AMS-119 Geara Doga mobile suits of Neo Zeon, led by the MSN-03 Jagd Doga and Char's MSN-04 Sazabi.

In one of the earlier asteroid drops, Char would use his MSN-04 Sazabi to battle Amuro Ray in his RGZ-91 Re-GZ, however, the Re-GZ was not able to keep up with the more powerful Sazabi and was nearly destroyed. Afterwards, Char supplied the Anaheim Electronics with the psycoframe system, which is then used in the RX-93 ν Gundam they were building for Amuro. As Neo Zeon was trying to drop the asteroid Axis, the two would duel again in equal machines. The battle would carry them across, and through Axis in a battle reminiscent of their final duel in the One Year War. Although Char was an excellent pilot he was ultimately defeated by Amuro who severely damaged the Sazabi and captured Char’s escape pod. The wreckage of the Sazabi would remain on the outer surface of Axis for years.

Appearing in Model Suit Gunpla Builders Beginning G, it is a custom white colored Sazabi Gunpla used by Kenta Sakazaki. Besides the change in color, there does not seem to be any difference with the standard Sazabi Gunpla model. 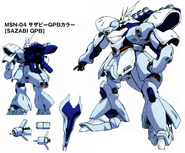 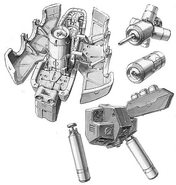 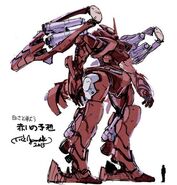 Portrait of Sazabi and ν Gundam by Hideaki Ito 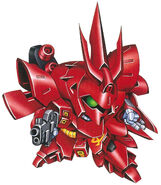 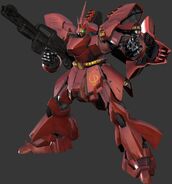 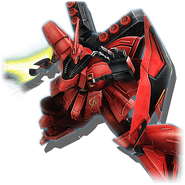 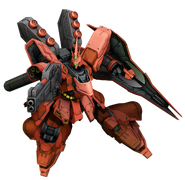 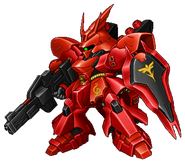 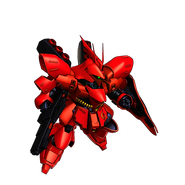 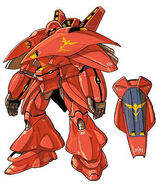 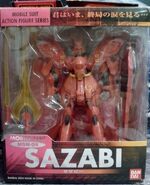 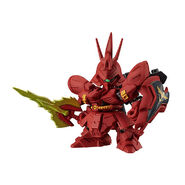 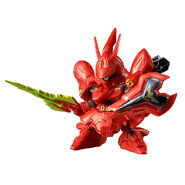 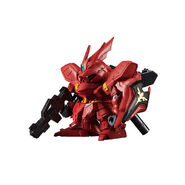