The MSN-04 II Nightingale was developed exclusively for Char Aznable, the leader of Neo Zeon. its most prominent feature was the incorporation of a Psycho-Frame. As a result, the Nightingale was completed as a Mobile Sit (MS) with capabilities akin to a Mobile Armor (MA). The Nightingale was an MS with exceptional abilities and its silhouette greatly deviated from a human design, with overhanging binders on both shoulders, a large rear armor piece that extended backwards, and front armor as large as the legs. Despite its unconventional design., mobility devices placed on the shoulders and rear armor enabled the MS to gain high mobility and operability, and the five propellant tanks allowed for long combat operations. It was armed with a long-range, high-0power Large Mega Beam File, a Beam Tomahawk equipped with three devices, and 10 funnels. This armament configuration enabled the MS to gain combat abilities that could flexibly adapt to firefights, melee combat, and perform all-range attacks. The Nightingale was deployed during Char's Rebellion and overwhelmed Amuro Ray's RGZ-91 Re-GZ. It was as powerful as the RX-93-ν2 Hi-ν Gundam during the battle over Axis [3].

Simplified manipulators which functioned as hidden arms were attached to the back of the left and right front skirt. Each manipulator was equipped with a Beam Saber which could be used for surprise attacks during close combat [3].

Five Funnels were equipped on each of the movable binders, resulting in a total of ten funnels. They were resized Funnels from the NZ-333 α Azieru, and had high operability due to the adoption of a large-capacity condenser system [3]..

A large firearm with a total length of approximately 30 meters that could emit beams as powerful as Mega Bazooka Launchers. It was able to separately fire focused and diffused beams—resembling scattershot rounds see in shotguns— and could be fired rapidly. The weapon could also be used in Launcher Mode by unfolding its bipod and connecting it to an external energy source [3].

A large Mega Particle Cannon installed in the centre of the torso. its range was limited due to its placement, but it was extremely powerful as it was supplied with energy from the main body [3].

A close combat armament created by combining a Beam Saber and Beam Ax. It was also capable of forming a large beam saber by generating beams from the three beam blade generators at the same time [3].

Exterior defense equipment made from the same Gundarium alloy composition as the armor materials used for the Mobile Suit's main body. Optically guided missiles and a Beam Tomahawk were mounted on the back of the shield. Its sharp tip could also be used for striking attacks [3].

In U.C. 0093, Char Aznable appeared front and centre on the stage of history as the leader of Neo Zeon. He deceived the Earth Federation, and attempted to drop the asteroid Axis onto Earth. The Neo Zeon forces and Londo Bell unit fought over Axis, which was heading toward Earth. Char and Amuro also headed out to the battlefield to settle their own fight. The battle over the nuclear nozzles on Axis was reaching its climax, and Char's Nightingale and Amuro's Hi-ν Gundam were fighting on the surface of Axis. Following the fight, Char sneaked into Axis in pursuit of Amuro, but their fight continued, and the two faced each other again after returning to their mobile suits. Both suits lost their weapons and shifted to melee combat, and the Nightingale was receiving damage as the Hi-ν Gundam attacked it. Their fight was finally coming to a close [5]. 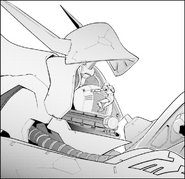 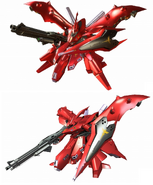 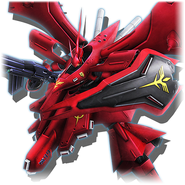 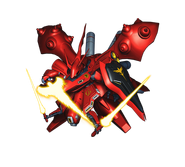 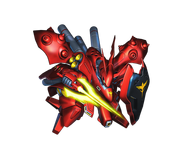 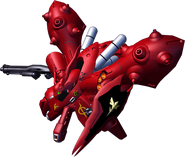 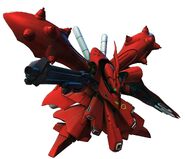 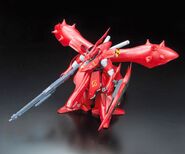 RE 1/100 Nightingale - Release date and price 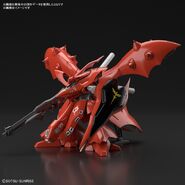 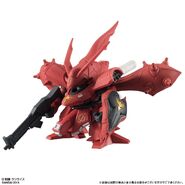