The MSN-04B Sazabi Heavy Equipment Ground Type (or AMS-04B Sazabi) is a variant of the MSN-04 Sazabi that appeared in Gundam Crossover Notebook II. It also appears in The Revival of Zeon and New MS Senki.

Originally intended to be a mass-production model developed specifically for Newtype pilots, it was instead used as a commander MS that could be used by regular pilots. Thus, there is no Psycho-Frame cockpit installed. Due to the worsening war situation, top priority was placed on weapons development for regular pilots rather than Newtype training. The funnel pods are removed along with adjustments to weight balance. Ground mobility has been improved in correspondence with increased body armor and enhanced firepower.

Two Sturm Faust rockets are equipped on the shield.

89 units were produced towards the end of the war and were deployed in Western Europe, Africa, Asia and North America.

One such unit was assigned to Lieutenant Kurtz, who had made himself an ace on the Eastern Front. He then participated in the assault of Verboten base (as a part of Char Aznable's overall plan to divert the EFF's attention away from Fifth Luna and to pull out the Zeon Remnants safely from Earth). The Sazabi engaged and destroyed the prototype PX-00531 ν Gundam Pre-Test Type, which earned its pilot a Zeon Cross. 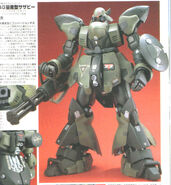 Retrieved from "https://gundam.fandom.com/wiki/MSN-04B_Sazabi_Heavy_Equipment_Ground_Type?oldid=460707"
Community content is available under CC-BY-SA unless otherwise noted.