Based on the frame of the mass-produced AMS-119 Geara Doga, the Jagd Doga was a special suit designed to be used by the Neo Zeon’s Newtype pilots. Developed using data from the evaluation tests of the AMS-120X Geara Doga Psycommu System Test Type and the AMS-119N Röte Doga, it has a psycoframe cockpit for controlling the six funnels stored on its shoulder-mounted funnel pod shields. Unlike previous mobile suits that utilize funnel weapons, the Jagd Doga cannot recharge its funnels. Other weapons of the suit include a beam saber with attached heat knife for close combat, two triple missile launchers behind the funnel pod shields, and a beam assault rifle for Gyunei's unit, while Quess' unit carried a mega Gatling beam gun.

The Jagd Doga's sensors, thrusters, and nuclear reactor have also been significantly improved compared to those on Geara Doga. As a result, it has greater speed and mobility, and more power for its weapons and other systems. In terms of performance, the Jagd Doga was the second most powerful mobile suit in the Second Neo Zeon's arsenal, second only to the MSN-04 Sazabi.

In U.C. 0096, Quess' Jagd Doga was repaired and modified by The Sleeves for their own use. A Geara Doga's right arm served as a replacement for the original that was lost during the Second Neo Zeon War. However, it also lost the right arm's funnel pod shield because of this. Other modifications include a Geara Doga's backpack replacing its original one, two funnels for its remaining funnel pod shield, and it was repainted yellow and dark gray and given the personal markings of units used by The Sleeves.

A beam saber is stored in the Jagd Doga's left side armor, and serves as its primary close combat weapon. The beam saber generates a beam of plasma contained by an I-field that can cut through any metal alloy that has not been treated to resist it.

The Jagd Doga's beam saber is unique in having a removable heat knife attached to its handle. The heat knife is a small blade that can be superheated to melt and cut through enemy's armor.

One mounted on each shoulder, this shield serves as a storage rack for the funnels on the front and has a triple missile launcher at the back.

Three missiles can be fired from behind each funnel pod shield, for a total of six missiles. The missiles could deal moderate to heavy damage to a mobile suit, but only deal light damage to a battleship.

One of the Jagd Doga's more powerful features is its Newtype-use remote controlled weapons. The six funnels are stored on the two funnel pod shields, each funnel has a power rating of 10.6 MW, and can easily destroy mobile suits or nuclear missiles. They are the same as those used by the MSN-04 Sazabi, but cannot be reused due to a lack of recharge port on the mobile suit. Thus, once they ran out of power, they are discarded. The Sleeves' Jagd Doga only has two funnels stored on the left funnel pod shield.

Used by The Sleeves' Jagd Doga, it is located on the right arm which originated from Geara Doga. The Geara Doga's arm is a replacement for the original arm that was lost during the Second Neo Zeon War.

A handheld weapon used by Gyunei Guss's Jagd Doga, it is a beam rifle that can be fired in full-auto or semi-auto mode. Powered by a rechargeable energy cap, it is lighter and easier to wield than a standard beam rifle.

The beam assault rifle mounts a grenade launcher that holds one round. The grenade is not very effective against large ships, but is ideal mid-range anti-mobile suit weapons.

A handheld weapon used by Quess Paraya's Jagd Doga, it a beam gun with four revolving barrels and can rapid fire beam shots for a longer period of time. Also known as 'Beam Gatling Gun', it is powered by a rechargeable energy cap.

A handheld weapon originally used by the AMS-119 Geara Doga, it is powered by a replaceable e-pac. The beam machine gun was used by The Sleeves' Jagd Doga.

The Jagd Doga is equipped with a custom round shield. It is treated with an anti-beam coating to temporarily defend against beam weapons and has four built-in mega particle cannons.

Mounted in the shield, the four mega particle cannons have a power rating of 9.3 MW each. The power and spread of the beams from the mega particle guns are both powerful and difficult to evade, making them an effective weapon against both mobile suits and battleships.

The Psycoframe is a technology that builds the brainwave-to-machine code translator known as Psycommu into the cockpit of a Mobile Suit. This allows a Newtype pilot to control the mobile suit as if it were his/her own body.

Only two units are confirmed to be built. The first unit, which spots a dark blue color and an antenna on its head, was piloted by cyber-Newtype Gyunei Guss. With his unit, he fought three times against Amuro Ray, who the first time piloted the RGZ-91 Re-GZ and the second and third time his own RX-93 Nu Gundam. However during the third battle, his Jagd Doga was destroyed by Amuro and Gyunei was killed. The second unit, painted red, was piloted by the Newtype Quess Paraya. Quess however later switched to the large mobile armor, the NZ-333 Alpha Azieru.[1]

In U.C. 0096, Quess' Jagd Doga was repaired for combat during the Laplace Incident. Its right arm, lost during the Second Neo Zeon War, was replaced by a Geara Doga's arm, which uses the same basic frame. It was armed with the Beam Machine Gun used by the Geara Doga, only carried two funnels and the backpack is replaced with the Geara Doga's backpack. This unit was piloted by Full Frontal's Royal Guard pilot Zechst Ade and sent into battle against Londo Bell forces during the Battle of Industrial 7.[2]

An original mobile suit that appears in the early Super Robot Wars games. The Mass Production Type Jagd Doga looks similar to Quess' unit but has a green color scheme instead of a red one and utilizes weapons similar to Gyunei's unit. 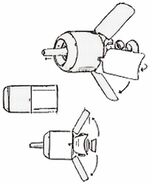 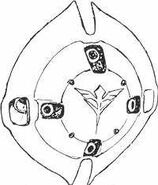 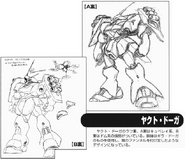 Early Designs. Plan A is influenced by Qubeley and Plan B had a Dom type head. 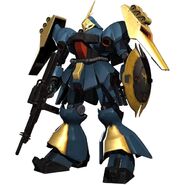 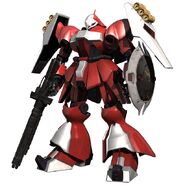 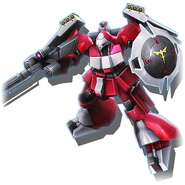 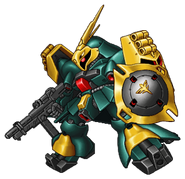 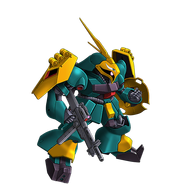 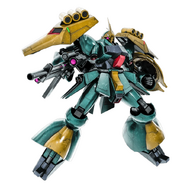 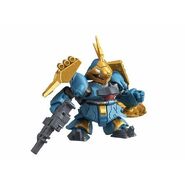 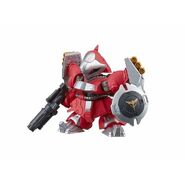