The MSN-02 Perfect Zeong is a prototype Newtype-use mobile suit, and the completed version of the MSN-02 Zeong. It first appeared in Plamo-Kyoshiro, and later in the original design series Mobile Suit Variations (MSV) and the Mobile Suit Gundam: Char's Deleted Affair: Portrait Of Young Comet manga.

The Perfect Zeong was the final unit produced under Zeon's MS-16X Bishop Plan. Using the data obtained from the test runs of the MSN-01 Psycomu Test High Mobility Type Zaku II, Zeon engineers drafted plans for a new mobile suit and constructed the Perfect Zeong. Due to the MSN-02's massive size and the vast amount of energy required to power its multitude of beam weaponry, the Perfect Zeong's fusion reactor is 3.8 times larger than that of a standard mobile suit. According to the manga Mobile Suit Crossbone Gundam: Skull Heart, the Perfect Zeong's massive size was due to misconceptions on the battlefield: many pilots at the Battle of Solomon had seen a giant Gundam head and assumed that the Gundam was massive and not Mobile Suit-sized. Everyone was unaware until the end of the fight (and even then, it's still treated as a rumor) that the "giant Gundam head" was actually the B Gundam.

The most notable difference between the Zeong and the Perfect Zeong is the obvious inclusion of legs in the Perfect Zeong. The enormous rocket thrusters mounted beneath the Zeong's skirt armor are now mounted on the bottoms of the Perfect Zeong's feet. As the legs increase the Zeong's mass, in "Perfect" form it would actually have somewhat reduced acceleration, though improved AMBAC capability would make it more agile. Because the Perfect Zeong's size made it impossible to fit into the hangar of any ship, the giant MS had to be tethered to a ship and towed. Despite the fact the Perfect Zeong represents the completed model had the Zeong been fully assembled before the battle of A Baoa Qu, in most presentations it still lacks armored plating on its right thigh and right bicep.

The forearms of the Perfect Zeong can be detached and remotely maneuvered with thrusters built into their base. They are guided by wires and controlled by the Newtype pilot's thoughts via the psycommu system. Each of the Zeong's forearms are in essence powerful mega particle guns with five barrels each built into the fingers. The five barrels on both arms are fire-linked, so each time one of the arm weapons fire a total of five beams, ten if both mega particle guns fire. This large amount of beams, combined with the remote weapons' ability to create all-range attacks, produces a powerful spread of beams that is nearly impossible to avoid and can destroy multiple machines.

There are two fire-linked mega particle guns mounted in the waist of the mobile suit.

Mounted in the head of the mobile suit is a mega particle gun. It can fire at least one shot while the head is detached, indicating that there is some sort of energy capacitor that holds a limited charge so that the Zeong's head can use attacks while retreating.

Equipped only by Sacky's unit in Plamo Kyoshiro, this custom-made physical blade is handheld when in use and stored on the left waist when not in use.

During the One Year War, the researchers of the Flanagan Institute discover that Newtypes emit powerful thoughtwaves - similar to regular brainwaves, but not electrical in nature - which they call psycowaves. The Flanagan Institute goes on to develop a mind-machine interface called the psycommu (psycho-communicator) system, which receives these thoughtwaves and translates them into computer commands. Using this interface a Newtype pilot can direct remote weapons, and operate huge mobile armors, by thought alone.

The head of the Zeong contains its cockpit and can detach from the main body to function as an escape pod. However, it can only operate for less than ten minutes once detached.

A total of three Zeong units were built, one of them (which was only 80% complete) was taken by Zeon ace pilot Char Aznable during the Battle of A Baoa Qu.

In Plamo-Kyoshiro, the Perfect Zeong is a custom Gunpla built by American model builder Sacky Takeda. It's actually 1/144 Zeong equipped with a modified 1/100 MS-09B Dom's legs. Takeda also used metallic parts for its antenna horns and equipped it with a beam saber for close combat. He also used optical fiber to add a lighting effect. However, the last feature made it extremely weak against PF-78-1 Perfect Gundam's shoulder water cannon.

The lone unit of Perfect Zeong was completed based on Zeong (Unit No. 3) stationed at Axis Zeon's Ambrosia base and was piloted by Char Aznable. Afterwards, it was dismantled because of the shortage of parts at Ambrosia. 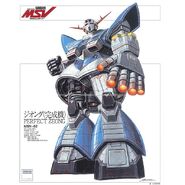 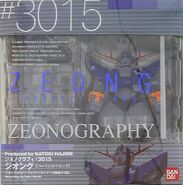 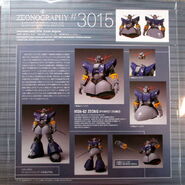