The MSN-02R Zeong High Mobility Type was an original creation (Games MSV) for the Gihren's Greed video game for the Sony PlayStation 2.

While the MSN-02 Perfect Zeong was meant to allow the Zeong to fight under Earth's gravity, the Zeong High Mobility Type was a space-use only version, omitting the legs, which were more of a hindrance in space combat, and instead increasing its speed and mobility with a pair of large, wing-like back-mounted boosters. For added weaponry two plasma leaders were stored in compartments on the boosters.

The forearms of the Zeong High Mobility Type can be detached and remotely maneuvered with thrusters built into their base. They are guided by wires and controlled by the Newtype pilot's thoughts via the psycommu system. Each of the Zeong's forearms are in essence powerful mega particle guns with five barrels each built into the fingers. The five barrels on both arms are fire-linked, so each time one of the arm weapons fire a total of five beams, ten if both mega particle guns fire. This large amount of beams, combined with the remote weapons' ability to create all-range attacks, produces a powerful spread of beams that is nearly impossible to avoid and can destroy multiple machines.

There are two fire-linked mega particle guns mounted in the torso of the mobile suit.

Mounted in the head of the mobile suit is a mega particle gun. It can fire at least one shot while the head is detached, indicating that there is some sort of energy capacitor that holds a limited charge so that the Zeong's head can use attacks while retreating.

Stored in compartments on the wing binders are two "plasma leaders", which were a big improvement over the original leader weapon used on the MAX-03 Adzam. They would open up, deploy around a target, and emit electrical plasma that would overload a mobile suit's systems and electronics.

The head of the Zeong contains its cockpit and can detach from the main body to function as an escape pod. However, it can only operate for less than ten minutes once detached. 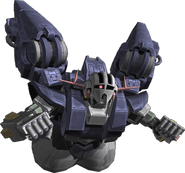 Retrieved from "https://gundam.fandom.com/wiki/MSN-02R_Zeong_High_Mobility_Type?oldid=496383"
Community content is available under CC-BY-SA unless otherwise noted.