This is a modified version of the second MS-06Z Psycommu System Zaku unit. When the model number of the Zeong was changed from "MS-16X" to "MSN-02", this machine's model number was also changed to "MSN-01". Because the MS-06Z had limitations in collecting data on the Psycommu system during high-speed maneuvers, the legs were omitted on this machine and replaced with two sets of high mobility thruster units, each equipped with four large, high output, thermonuclear rocket engines. This gave it mobility comparable to that of a mobile armor.

However, as the mobile suit's propellant capacity could not keep up with the added rocket engines, it could only be used for a short time. Despite this, the machine was able to collect valuable data that contributed to the Zeong's development. Furthermore, its test results also revealed the limitations of a Zaku-II based design, leading to the development of the Zeong as a completely new machine. Although a test machine, there were records of it participating in the defense of A Baoa Qu along with the MS-06Z.

Equipped with a powerful mega particle cannon installed in each finger, the forearms of the MSN-01 Psycommu Test High Mobility Type Zaku can be detached from its elbows and function as wired remote weaponry, enabling all-range attacks. The Wired 5-barrel Mega Particle Cannon can easy sink a battleship in a single attack.

There were records of the Psycommu Test High Mobility Type Zaku and MS-06Z Psycommu System Zaku Unit 3 being transferred to A Baoa Qu, and deployed for combat there.[1]

In Mobile Suit Gundam Thunderbolt: December Sky, one unit piloted by Billy Hickam was deployed at A Baoa Qu to fend off the EFSF's onslaught.[2]

In the Gundam Crisis game, one purple-colored unit was seen raiding Solomon after the Earth Federation Forces captured the base.[3] 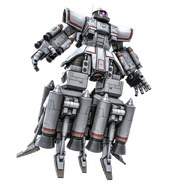