The MSN-001 Delta Gundam (aka δ Gundam) was a mobile suit design which was never constructed but was further developed into the MSN-00100 Hyaku Shiki and MSN-001A1 Delta Plus. It was first featured in the Gundam MS Graphica photo-novel and later the game Mobile Suit Gundam UC (The Postwar) and UC-MSV.

The Delta Gundam is a transformable mobile suit designed under the Zeta Project. However, due to technological issues, its movable frame lacked the strength needed to support its transformation system and the Delta Gundam was instead completed as the non-transformable MSN-00100 Hyaku Shiki. A few years later, Anaheim Electronics took another look at its design and used it as the basis for the MSN-001A1 Delta Plus. The Delta Gundam is armed with the standard armaments of a mobile suit, vulcan guns, a beam rifle, beam sabers, and a shield. It also features the same Anti-Beam Reflective Coating featured on the Hyaku Shiki.

A pair of shell-firing weapon built into the head. Though not powerful, its high rate of fire meant it was employed to intercept incoming missiles, etc

A standard hand carried ranged beam weapon is the beam rifle. This particular model is a long type designed for variable MS with excellent output and range. It has an experimental dual supply system capable of using the same e-pacs from the beam rifles of the MSN-00100 Hyaku Shiki and RX-178 Gundam Mk-II. By utilizing a beam drive mechanism that combines the two types of mega particle capacitors, usage such as depleting all the energy in a single shot can be realized. This weapon would later be adopted by the MSF-007 Gundam Mk-III.

The Delta Gundam's defensive armament, able to defend against both beam and physical attacks. It doubles as the unit's forward section in waverider mode and stores a pair of beam sabers.

The beam saber is the standard close-combat weapon of many mobile suits, it emits a blade of plasma contained by an I-field that can cut through any physical armor not treated to resist it. The Delta Gundam's beam sabers also double as beam guns when the suit is in waverider mode.

The Anti-Beam Coating technology coats multiple layers of high specific heat capacity material on top of the armor of the mobile suit that evaporates in high temperature. It provides a type of sacrificial protection against any type of beam weapon. However, due to its nature of ablating when defending against great heat, Anti-Beam Coating can only tolerate a few hits to the same spot. Due to its high cost, the Anti-Beam Coating was only used on a few mobile suits.

The Delta Gundam was redesigned into the non-transformable Hyaku Shiki due to insufficient frame strength needed for its transformation system. Later, while Anaheim Electronics was trying various approaches to develop a transformable production model of the Zeta series, it also simultaneously conducted a reinvestigation of the Delta Gundam's plans. This resulted in the MSN-001A1 Delta Plus. The Delta Gundam's data also still existed as a computer simulation. In U.C. 0094, Riddhe Marcenas fought against a computer simulated unit that was driven by Quattro Bajeena's combat data. 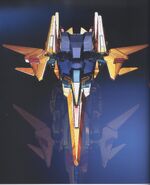 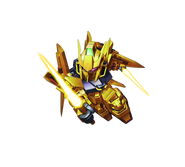 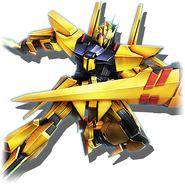