The MSN-001X Gundam Delta Kai (aka δ Kai or δΧ) is a prototype transformable mobile suit developed from the MSN-001A1 Delta Plus as a technology demonstrator. It appears in the Mobile Suit Gundam Unicorn video game, Mobile Suit Gundam U.C. 0094: Across the Sky and UC-MSV.

The final machine of Anaheim Electronics' Delta-type series, the Gundam Delta Kai is an enhanced version of the MSN-001A1 Delta Plus, which is used to demonstrate new experimental technologies that can be used for future mobile suits. As such, the unit is greatly overhauled from the regular Delta Plus, modifying both the MS and Waverider forms as well as enhancing its variable frame. Several thrusters were also fitted into the unit's legs and back skirt which allow the MS to fly in both space and under gravity, giving it a tremendous amount of speed and maneuverability. The Waverider mode can also function as a subflight system when needed.

Aside from the aesthetic change, the Delta Kai is fitted with various experimental weaponry derived from older mobile suits. This gives it a higher attack power and versatility than the Delta Plus, however despite the amount of weapons equipped it is very complicated to use in a tactical situation. The Delta Kai is also equipped with a specialized system called the n_i_t_r_o System, allowing regular pilots to gain Cyber Newtype-like abilities.

The 60mm vulcan gun has been a standard armament of Federation suits since the One Year War. While not very powerful and typically unable to penetrate mobile suit armor, the vulcan gun is useful in intercepting missiles/rockets, destroying mobile suit sensors, and engaging lightly-armored targets such as tanks and small aircraft.

A specialized beam rifle with a power output comparable to a beam cannon. The beam of this weapon could destroy a MS with a direct hit. It was originally developed for the MSN-001A1 Delta Plus from the FA-00100S Full Armor Hyaku Shiki Kai's Mega Buster.

As their name suggests, they are prototypes of the RX-93 ν Gundam's Fin Funnels, repurposed for the Delta Kai's use. The Delta Kai mounts two Proto Fin Funnels on its back. Using the n_i_t_r_o System, they may be deployed efficiently even by non-Newtypes, giving the pilot all-range attack ability.

A standard defensive feature of most mobile suits is an arm-mounted shield. It is a thick piece of metal designed to stop physical rounds and is treated with anti-beam coating to withstand several beam shots before the coating wears off. Gundam Delta Kai's shield also serves as the unit's forward section in Waverider mode. Beside the Beam Sabers/Beam Cannons, it can mounts a large variety of weapons.

The Delta Gundam Kai's close combat armaments, they are stored in the shield. Beam saber is a small device held in the mobile suit's hands when operated and is powered by a rechargeable energy capacitor. It emits a blade of plasma contained by an I-Field and is capable of cutting through any metal not treated with anti-beam coating. Delta Gundam Kai's beam saber also doubled as beam cannons while in the shield and could be utilized in Waverider mode, similar to the MSZ-006 Zeta Gundam's beam sabers.

Optional close-combat weapon that can be mounted on the front of the shield. It produces a disruptive effect through a combination of explosive force and high voltage power using a built-in capacitor. A similar weapon is used by the FA-00100S Full Armor Hyaku Shiki Kai.

Optional weapon that can be mounted on the front of the shield. Developed by Strategic Naval Research Institute (SNRI), it fires heavy-caliber armor-piercing rounds. The Mega Machine Cannon could also be used by the D-50C Loto.

An optional weapon that can be mounted on the front of the shield, the High Mega Cannon can seriously damage a mobile suit with even a glancing hit, and in some case, total destruction. Developed with data obtained from the MSZ-010 ΖΖ Gundam, its output has been reduced to about 46% [1] in order to lessen the burden to the generator, resulting in an output of 23 MW.

A weapon originally used by the RX-0 Unicorn Gundam, it is a highly customized beam rifle designed with an energy condenser. The power output in a single shot is the equivalent of 4 regular beam rifle shots at the expense of an entire E-pac. Each of the beam magnum's magazine is loaded with 5 E-pacs, allowing a total of five shots before a new magazine is needed.

Gundam Delta Kai is equipped with the special newtype injection trace reformed oldtype System. The n_i_t_r_o System forcibly enhances a normal pilot into a Cyber Newtype temporarily, and causes the mobile suit to emit blue flames during the process. It improves the pilot's response time, and allows the use of complicated fire control system as well as remote weaponry such as Delta Kai's Fin Funnels. However, the process of forcibly turning the pilot into a Cyber Newtype involve "rewriting" the brain, and this causes the pilot's personality to become unusually aggressive and unstable.

Anaheim Electronics specially converted one Delta Plus into the Delta Kai, used by the Federation for testing the n_i_t_r_o System and its weapons. It was fielded in a mock combat, where it defeated the MSN-001A1 Delta Plus, before encountering the The Sleeves. Despite the enemy's numbers, the abilities of the n_i_t_r_o System instantly took out all units, even though the system is proven to be dangerous to the pilot. Soon after the battle, the Delta Kai was transferred to Earth and was heavily modified into the MSN-001X[G] Land Combat Type Gundam Delta Kai and performed several performance tests. 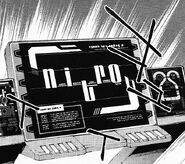 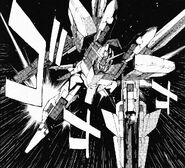