The MSN-001A1 Delta Plus (aka δ Plus) is a variant of the MSN-001 Delta Gundam which appears in the novel and OVA Mobile Suit Gundam Unicorn. It is piloted by Riddhe Marcenas.

The Delta Plus is a prototype transformable mobile suit developed in U.C. 0090, which can serve as an all-purpose attack unit. It is based on the MSN-001 δ Gundam, a transformable mobile suit designed during the Gryps Conflict that, because of problems with insufficient frame strength, was completed as the non-transforming MSN-00100 Hyaku Shiki. While Anaheim Electronics was trying various approaches to develop a production model of the transformable Zeta series, it also simultaneously conducted a reinvestigation of the shelved Delta plan, creating the Delta Plus as a result. The Delta Plus' main feature is its capability to reenter the atmosphere unassisted thanks to its ability to transform into a waverider mode. It is also capable of atmospheric flight under the influence of 1G because of its high thrust output and is also equipped with a Bio-sensor. Due to the Delta Plus being a non-standard prototype, only a limited number of these units were produced.

A standard armament of many Federation mobile suits. The pair of head-mounted shell firing weapons have high rate of fire, but little power and are generally ineffective against mobile suits. However, they can damage lightly armored areas such as the sensors, and are ideal for shooting down small, lightly armored targets such as missiles, small vehicles, etc.

The Delta Plus uses the same beam rifle as the RGZ-95 ReZEL, which is powered by a replaceable energy pac, if the energy pac runs out of energy it can be replaced with a fresh one. Besides the standard shooting mode, the beam rifle also has a long duration, high output shooting mode that is known among the federation’s pilot as the ‘Guillotine burst’. Lastly, the beam rifle's muzzle can generate a beam blade, allowing the rifle to function as a long beam saber. Used in the OVA and TV series.

The Delta Plus' shield is a multipurpose weapon. Other than being a defensive armament, it stores multi-purpose grenade launchers, beam sabers, a beam cannon and also doubles as the unit's forward section in waverider mode.

Located on the Delta Plus' shield, they can be loaded with various type of ammunitions.

A beam cannon is mounted on the Delta Plus' shield.

The standard close range armament for most Federation mobile suits, it is a small device held in the mobile suit's hands when operated and is powered by a rechargeable energy capacitor. The beam saber emits a blade of plasma contained by an I-Field and can cut through most armor not treated with anti-beam coating. The Delta Plus has two beam sabers stored in its shield and they can be used even when stored. In waverider mode, the beam sabers function as beam guns.

A weapon borrowed from the RX-0 Unicorn Gundam, it is a highly customized beam rifle designed with an energy condenser. The power output in a single shot is the equivalent of 4 regular beam rifle shots at the expense of an entire E-pac. Each of the beam magnum's magazine is loaded with 5 E-pacs, allowing a total of five shots before a new magazine is needed. Usage of this weapon however will cause the Delta Plus' arm to become inoperable.

A specialized beam rifle with a power output comparable to a beam cannon. The beam of this weapon could destroy an MS with a direct hit. This is the same weapon as that used by the FA-00100S Full Armor Hyaku Shiki Kai. In the novel, this weapon served as the Delta Plus' primary firearm. It also appear in Across the Sky manga.

The Delta Plus is also equipped with a bio-sensor, however, it is less effective than those which were developed by Neo Zeon.[1]

As the Delta Plus is a non-standard prototype that is hard to incorporate into a normal team formation, one such unit was assigned to the Nahel Argama in UC 0096, which is likewise a non-standard ship that often operates on its own.

For more information on the Delta Plus' history, please go to Riddhe Marcenas' page.

In the manga version of Gundam Narrative, a Delta Plus with the callsign of "D001" engaged Luio & Co.'s squad of MSK-008 Dijehs after receiving the escort leader's call for support. After Jona only sniped its fringe, it transformed and engaged with one of the Dijehs, losing a leg in the process. It managed to destroy two Dijehs before being disabled by another Dijeh in a heated battle. 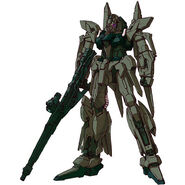 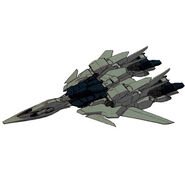 Entering the atmosphere in Waverider Mode

Among Federation forces during their attack on Palau (Gundam Perfect File) 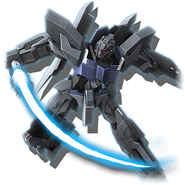 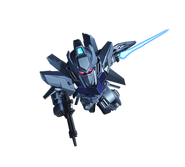 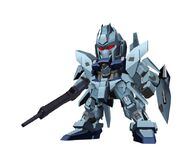 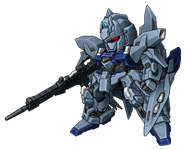 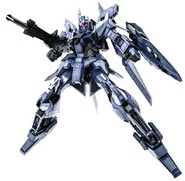 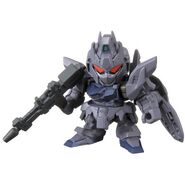