The MSN-001-2 Delta Gundam II (aka Delta Gundam Unit 2) is a transformable mobile suit that appeared in the short movie Competition of New Gundam: Red or White. The unit was intended to be piloted by Quattro Bajeena.

A standard armament of mobile suits. These shell firing weapons have a high-rate of fire but little power and are generally ineffective against other mobile suits, though they can damage lightly armored areas such as the sensors. They are ideal for shooting down small, lightly armored targets such as missiles.

The Delta Gundam II's defensive armament, it doubles as the MS's forward section in waverider mode and stores a pair of beam sabers.

The beam saber is the standard close-combat weapon of mobile suits, and emits a blade of plasma contained by an I-field that can cut through physical armor not treated to resist it. The Delta Gundam's beam sabers also function as beam guns when the suit is in waverider mode.

The same weapon as used by Rick Dias, the Clay Bazooka was originally designed to fire adhesive rounds which immobilize enemy machines rather than destroying them outright. However, it could also be loaded with other types of ammunition, including conventional explosive round as well as pellet shot round. The Clay Bazooka has 1 round in its chamber with 7 more rounds in a reloadable magazine. A retractable hook is present on top of the bazooka's barrel for mounting onto Hyaku Shiki's backpack when not in use.

The Anti-Beam Coating (ABC) technology coats multiple layers of high specific heat capacity material on top of the armor of the mobile suit that evaporates in high temperature. It provides a type of sacrificial protection against any type of beam weapon. However, due to its nature of ablating when defending against great heat, Anti-Beam Coating can only tolerate a few hits to the same spot. 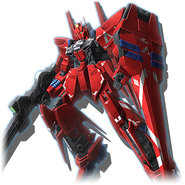