The MSM-10 Zock was one of Principality of Zeon's amphibious mobile suits developed during the One Year War. It was introduced in the anime Mobile Suit Gundam.

The Zock was an experimental amphibious mobile suit that could almost be characterized as a mobile gun platform, it featured an ultra-large thermonuclear reactor. The front and back were completely symmetrical and used a 360 degree mono-eye camera. The Zock's huge body houses a battery of mega particle cannons, which can fire both forward and backward. Incapable of walking on its vestigial legs, it moves by hovering, or in jet-assisted jumps.

At the top of the Zock's body is a phonon maser gun capable of firing at targets above it, and can be used to great effect when the Zock is cruising underwater.

On the Zock's body are eight mega particle cannons, 4 on the front and back, giving it 180 degrees of line of fire. Its barrage is comparable to one MS company.

For melee combat, the Zock is armed with a pair of claws, known as iron nails, on each forearm. They can be used to grapple or smash enemies.

The Zock was produced at California Base, an Earth Federation base captured early in the war, in the last few weeks of the Zeon occupation on Earth. The suit was more like a hovering gun emplacement than a true mobile suit. It could cover a wide area of attack and was very deadly thanks to its mega particle cannons and its symmetrical design. In the end, though, only 3 Zock units were produced with one of them serving under Commander Char Aznable's forces in the siege of the Federation's Jaburo General Headquarters on November 30, U.C. 0079.

Moving underwater with two Goggs behind 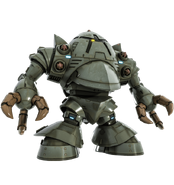 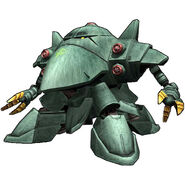 As featured in Mobile Suit Gundam: Federation vs Zeon 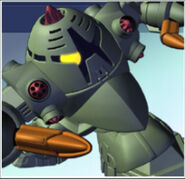 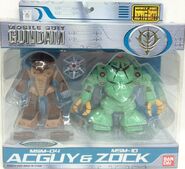