The MSM-07N Ram Z'Gok is a mobile suit that first appeared as a part of the MSV-R line and later in the MSV-R: The Return of Johnny Ridden manga series.

Although the original Z'Gok is regarded as one of Zeon's best amphibious mobile suits of the One Year War, it still had one very severe flaw. When used in anti-ship role, the Z'Gok had multiple means of destruction at its disposal. It could attack from a distance using the missile launchers mounted in its head, or pierce a ship's hull at high-speed with its claws. However, there were several cases in which Z'Goks punched through ship hulls but became stuck in the wreckage because of the claw's design. Many of these cases resulted in the loss of the mobile suit and pilot due to the resulting explosions as the suit and/or pilot were unable to escape in time.

Designed to overcome this flaw, the Ram Z'Gok was equipped with many improvements, including redesigned arms, a modified head, and a modified backpack. The Ram Z'Gok retained the Z'Gok's arm-mounted mega particle cannons, but the iron nails are replaced by a pair of spike shields. These shields gave the Ram Z'Gok the same close-combat capabilities, but removed the possibility for the mobile suit to become "stuck" to its target during combat. Another advantage of the arm-mounted shields is that the Ram Z'Gok could fire its mega particle cannons faster, since the fire-control system no longer needed to be concerned with the opening and closing of the iron nails.

The Z'Gok's head-mounted missile launchers are removed in the Ram Z'Gok in favor of a head-mounted ramming spike. The spike is similar in design as the Zaku II's Heat Hawk in that it has the ability to become super-heated and cut through mobile suits and ship armor with ease. Like a submarine's conning tower, the spike can also be used to break surface ice when the mobile suit is operating in extremely cold waters.

Mounted on the head of the Ram Z'Gok is a long heat ram, similar in design to the Zaku's heat hawk and the Dom's heat saber. The Z'Gok's head-mounted missile launchers have been replaced by high-resistance shock absorbers to lessen shock to the pilot and damage to the mobile suit during ramming attacks.

The mega particle cannons mounted in the arms of the Ram Z'Gok are presumably identical to those of the MSM-07 Z'Gok.

Aside from their obvious defensive capabilities, the claw shields have excellent potential as close-combat weapons. The claws that extend from the shield are as long as the shield itself (clearly longer than the MSM-07 Z'Gok's claws), giving the Ram Z'Gok excellent, if not superior close-combat capabilities. 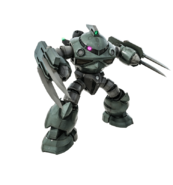 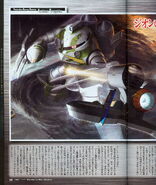 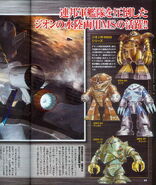