The MSM-07E Z'Gok-E (aka MSM-07E Z'Gok Experiment) is an experimental amphibious mobile suit created by the Principality of Zeon during the One Year War. It is first featured in the Mobile Suit Gundam 0080: War in the Pocket anime OVA series.

The Z'Gok E was an experimental improved version of the MSM-07 Z'Gok. Besides improved beam cannons in its arm, allowing for rapid-fire, the original Z'Gok's head-mounted missile launchers were also replaced with torpedo launchers for additional firepower when operating underwater. To allow for better cruising range underwater, the suit's main propulsion systems were relocated from the back to the legs to create a more streamlined body shape. Its limbs were also designed to be retractable for the same reason. The thrusters built into its back were meant for jumping and various ground based movements, and greatly boost the suit's mobility on land. The Z'Gok E used a standardized cockpit with the introduction of the United Maintenance Plan, and was powered by an improved generator which gave the suit ample performance.

Mounted in the forearms, the pair of beam cannons are powered by E-Cap and have higher rate of fire than the Z'Gok's mega particle cannons.

Mounted in the forearms, they are improved version of the Z'Gok's iron nails. The vice claws can be used as simplified manipulators and as close combat weapons.

An optional back-mounted booster device used by the MSM-03C Hygogg and Z'Gok-E. This jet pack actually contains a pair of chemical rockets, which the mobile suit uses to launch out of the water and glide to a landing. The expended jet pack is then detached and discarded.

One unit was piloted by Steiner Hardy, the leader of the elite Cyclops Team. In December, U.C. 0079, the Cyclops Team launched an attack on the Earth Federation Forces' Antarctic Base, which was about to launch the RX-78NT-1 Gundam "Alex" into space.

While the two Hygoggs piloted by Mikhail Kaminsky and Gabriel Ramirez Garcia attacked surface targets, the Z'Gok-E entered an underground passage with Andy Strauss' Hygogg. After destroying a RGM-79D GM Cold Districts Type in the passage, Steiner was informed by Andy that the Gundam was being loaded onto a space shuttle, but he was pinned down by a GM and unable to destroy it. Just as Steiner moved to assist him, Andy attempted to fire a missile at the shuttle, only to be killed when his cockpit was hit. The explosion from the missile sent both the Hygogg and the Z'Gok-E crashing into the ground. 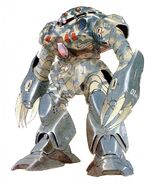 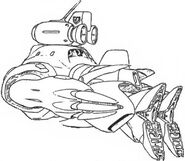 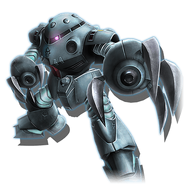 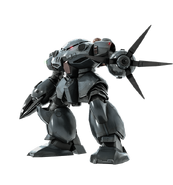