The MSM-07Di Ze'Gok is a variant of the MSM-07 Z'Gok and first appeared in Mobile Suit Gundam MS IGLOO: Apocalypse 0079.

The MSM-07Di Ze'Gok is a variant of the Z'Gok designed as a low-orbit, atmospheric-dive mobile suit, designed to intercept any ships shot up from Earth surface. It can be equipped with weapon containers outfitted with scattering beam cannons or missile pods. It retains the original Z'Gok's mega particle cannon and iron nails on the left forearm and the head-mounted missile launchers.

The left arm of the MSM-07Di Ze'Gok houses a mega particle cannon retained from the original MSM-07 Z'Gok, which is powered directly from the mobile suit's reactor. The mega particle cannons would be used to engage threats that are nearby or, in its actual case, to knock off any remaining parts of the canisters it was carrying.

The Ze'Gok retains head-mounted missile launcher from the original MSM-07 Z'Gok, which contains a total of six launchers for a maximum of 30 missiles. Whereas Z'Gok's missiles can be versatile (sea-to-surface or surface-to-surface), Ze'Gok's are restricted to air-to-air attack due to its specialized roles in aerial missions.

Mounted on the ends of the left arm, the Ze'Gok retains the iron nails which are the original Z'Gok's close-combat weapons. Its primary function is to hold the retrieving wire launched from the Gaw atmospheric attack carrier once Ze'Gok completed its mission on Earth.

A 73.7m long, 17.7m wide and 20.3m tall container that can carry payload of 540~670 metric tons. the LWC Type A can hold a total of 4 cruise missiles, each 60 meters in length. These large-sized, mid-range air-to-air missiles are capable of destroying Federation's Salamis-class cruisers. Alternatively, the LWC Type A can be reconfigured to be armed with a total of 4 large rocket pods for close-to-mid air support, with each pod contains a total of 28 unguided, fin-stabilized rockets. Compare to cruise missiles, the rocket's relatively weak destruction power is more than made up with a rapidly-fired volley for inflicting large-scale damage.

A 73.9m long, 22m wide and 18.2m tall container that can carry payload of 1189 metric tons. It is fitted with the Scattering beam cannon unit "Kuhblume", which is designed specifically for Mobile Diver System's Earth-drop descending attack. The Kuhblume mega particle cannons were developed from an unspecified Zeon mobile armor. Its main unit consisted of a total of 20-tube mega particle cannons arranged in circular array of 5 4-tube beam cannon sub-units. The mega particle cannons can be adjusted to fire individually-scattered beams or several thick and focused rounds for a maximum duration of 5 seconds or being risk of explosion due to overheating. Kuhblume's mega particle cannon are powered by 5 external-mounted fin-like energy cells which can be extended to act as the unit's stabilizer while the Mobile Diver System is in Earth-bound vertical descending mode. The Kuhblume is 69.7m long, 1188 metric tons, and can extend to a width of 63.5m.

Although it had managed to destroy five Federation ships as they ascended (which would have made Werner an Ace pilot), he was killed by a squadron of FF-X7Bst-II Core Booster II Intercept Type fighters. Shortly afterward, due to the battlefield shift to space, the Ze'Gok project was scrapped. 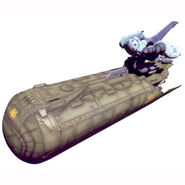 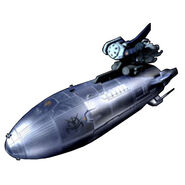 With LWC Type B 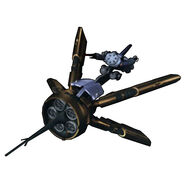 Retrieved from "https://gundam.fandom.com/wiki/MSM-07Di_Ze%27Gok?oldid=440487"
Community content is available under CC-BY-SA unless otherwise noted.