The MSM-07-A Amazing Z'Gok is a Gunpla that appears in Gundam Build Fighters: GM's Counterattack‎‎. Based on the MSM-07S Z'Gok Commander Type, it is built and piloted by Meijin Kawaguchi.

The Amazing Z’Gok is built by Meijin Kawaguchi to demonstrate the ‘Joy of Gunpla’.[1] Its main characteristic is that it integrates the capabilities of the Agg, Agguguy, Zogok and Juaggu (all are Zeon's mobile suits designed for the attack on Jaburo and originated from the MSV series) into a single unit, and this is something that can only be realized via Gunpla.[1][2] Although created for fun, the Amazing Z’Gok has a high degree of completion and its armament is well balanced.[1] Furthermore, its performance in battle is almost unrivalled.[1] The Meijin used Char’s Z’Gok Commander Type as the base Gunpla as he wanted to use Char’s traditional color scheme.[1] Though the Amazing Z’Gok’s backpack is identical in appearance to its base Gunpla, it had been modified to function in space.[1]

Deployed from the six launchers mounted in the top of the head, the missiles can be fired in and out of water.[1] They are very effective in destroying facilities and other buildings.[1]

A set of three claws mounted on both forearms.[1] In close combat, they can be very destructive when used in conjunction with the Gunpla’s mobility.[1]

The Iron Nails on both forearms can rotate and act as drills.[1] This mimics the Agg’s forearm-mounted drills, and the Amazing Z’Gok is said to be in ‘Agg Mode’ when using this weapon.[1]

A beam cannon mounted in each forearm, with the emitter located in the palm.[1] As the cannons move with the arms’ movements, they are easy to use for those who prefer guns.[1]

A pair of retractable heat rods can appear from two of the circular protrusions on the right forearm.[1][3] They can coil around the enemy unit and damage it via heat and electric shock.[1] The Agguguy has similar weapons, and the Amazing Z’Gok is said to be in ‘Agguguy Mode’ when using this weapon.[1]

The rocket launcher's three barrels extend out of the three circular protrusions on the left forearm when the weapon is deployed.[1][3] Meant for mid range attacks, they bring to mind Juaggu’s triple rocket launchers.[1] The Amazing Z’Gok is said to be in ‘Juaggu Mode’ when using this weapon.[1]

A pair of blades stored on the upper end of each forearm, they are launched like a boomerang to slice apart enemies, making them identical in function to the Zogok’s boomerang cutters.[1] The Amazing Z’Gok is said to be in ‘Zogok Mode’ when using this weapon.[1] 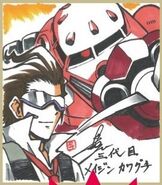 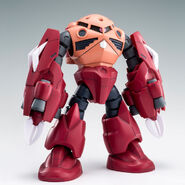 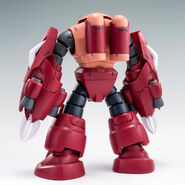 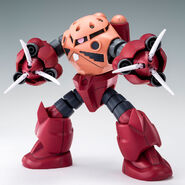 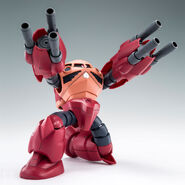 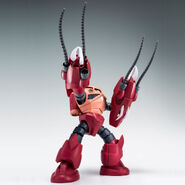 Retrieved from "https://gundam.fandom.com/wiki/MSM-07-A_Amazing_Z%27Gok?oldid=420809"
Community content is available under CC-BY-SA unless otherwise noted.