The MSM-06 Jurick (ジュリック) is an amphibious mobile suit from the Universal Century time-line. It first appeared as a part of the MSV-R line.

The MSM-06 Jurick was an amphibious mobile suit developed during the One Year War for the Principality of Zeon military, and plans were first drawn up in March UC 0079. The Jurick was fitted with extendable claws for striking the Earth Federation's mobile suits and infrastructure. The Jurick can assume a more streamlined form underwater by retracting the arm and leg units, achieving a reported speed of 67 knots. To improve visibility while cruising underwater, the Jurick has two mono-eye sensors, each on the fore and aft of its head. Its offensive capabilities include ten mega particle cannons, two Iron Nail claws, and Freezy Yard missiles to disable underwater mines.

The Jurick is equipped with ten mega particle guns, with eight mounted around the mobile suit's torso and one in each hand. Despite running an improved nuclear reactor to drive these weapons, they cannot be fired simultaneously.

The Jurick is equipped with built-in mega particle cannons in each hand for easier and more precise aiming. Each hand also had four-claws which could be used to thrust into the Earth Federation's mobile suits or they could be used to smash things as well.

The Jurick is equipped with a special type of missiles which, once launched, will release the Freezy Yard, which is a gelatinous webbing that is launched in a capsule from the Jurick's head while in underwater cruise mode, and covers almost the entire body of the Jurick. The Freezy Yard is used to capture underwater mines without causing them to detonate.

Two prototypes were constructed in August and completed in November UC 0079, but production was delayed to allow Zeon engineers to concentrate on development of the MSM-03 Gogg and MSM-07 Z'Gok amphibious mobile suits. The MSM-06 prototypes were undergoing test missions before the war ended. One unit was lost during testing, and another was captured by the Earth Federation Forces. Five machines were known to have been produced.

During the events of Mobile Suit Crossbone Gundam: Ghost, one of the Jurick mobile suits was put on display at the Zum Special War Museum. 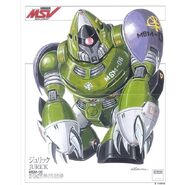