The MSM-04 Acguy (アッガイ, Aggai?) is an amphibious mobile suit featured in the Mobile Suit Gundam Thunderbolt manga and its ONA adaptation.

A variant of the MSM-04 Acguy used by Daryl Lorenz's team, it is noticeably smaller than the standard version, being approximately 12 meters tall.[1] Its Iron Nails were replaced with three-fingered manipulators, and its head, arms, and back can be fitted with various optional units, such as sensors and weapons, for specific roles.

The Enemy Search Type specializes in intelligence gathering and command, the Firepower Type provides fire support and serves as the rear guard, the Heavy Firepower Type acts as the primary combat element, and the Maneuver Type serves as the vanguard and scout, and support the other units.

A Vulcan gun is installed in each arm of the Acguy.

Instead of the four head Vulcan guns, the Acguy (Thunderbolt Ver.) is equipped with four missile launchers in addition to the standard six. In addition to standard ammunition, they can also be loaded with smoke ammunition and freezy yard.

The Weapon Cluster Unit used by Firepower Type Unit A.

The Weapon Cluster Unit used by Firepower Type Unit B.

A type of non-heated blade similar to the Iron Nail, it is both sharp and durable. It is stored in the Heavy Firepower Type's mission pack.

A superheated blade weapon made using the edge of a heat hawk. It is used by Maneuver Type Unit A.

A shield made using the Gogg's head armor. It is used by Maneuver Type Unit A.

A shield based on the shoulder shield of the MS-06K Zaku Cannon. It is used by Maneuver Type Unit B.

A flexible sensor visor used by the Enemy Search Type.

Replaces the left arm of the Enemy Search Type.

Each Acguy can be equipped with a backpack fitted with various equipment for their intended role.

The Enemy Search Type's mission pack has an antenna for laser communication, as well as a sonar probe system similar to the one used by the Federation's Hover Truck.

The Firepower Type's mission pack consists of a mine dispersal unit called "Rear Guard System" as well as thrusters. As its name suggests, the Rear Guard System was intended to buy time for friendly forces during a retreat.

Equipped with a periscope. 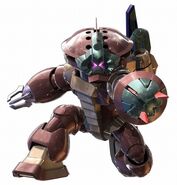 Retrieved from "https://gundam.fandom.com/wiki/MSM-04_Acguy_(Thunderbolt_Ver.)?oldid=462410"
Community content is available under CC-BY-SA unless otherwise noted.