The MSM-04 Acguy (アッガイ Aggai) is a mass-produced amphibious mobile suit, it was featured in the anime series Mobile Suit Gundam.

Following the Zimmad Company's MSM-03 Gogg, the Zeonic Company produced their own amphibious mobile suit for the Principality of Zeon, the MSM-04 Acguy. Acguys used many of the same parts and components as the MS-06F Zaku II, including twin Zaku II F-Type Minovsky ultracompact fusion reactors. However, even with the twin reactors, the Acguy left only a trace heat signature, making it effective for stealth and infiltration operations. 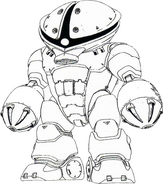 Retrieved from "https://gundam.fandom.com/wiki/MSM-04_Acguy?oldid=357719"
Community content is available under CC-BY-SA unless otherwise noted.