The Agguguy is a mobile suit from the Universal Century timeline. It debuted as part of the official Mobile Suit Variations and made its first animated appearance in Mobile Suit Gundam ZZ.

As Zeon prepared for its massive invasion of the Earth Federation Force's underground military headquarters of Jaburo, the Zeon military engineers stationed at California Base began developing several specialized mobile suits to aid in the assault. One of these designs was the Agguguy, an amphibious mobile suit based on the MSM-04 Acguy.

The Agguguy was heavily armored, yet still surprisingly agile and quick. The Agguguy was designed primarily for close combat with two 20mm vulcan guns in its head, as well as a pair of spinning whip-like heat rods built into each hand that could be used to grapple with enemies, or electrocute and slice through foes. The Agguguy's heat rod hands can also be removed and replaced with razor-sharp claws similar to those of the MSM-07 Z'Gok.

Mounted on the head of the Agguguy is a pair of vulcan guns, these shell firing weapons have a high rate of fire but little power and can't damage the thick armor of a mobile suit, though they can damage lightly armored areas such as the sensors. They are ideal for shooting down small, flightly armored targets such as missiles, attack vehicles, etc.

Mounted on each of the Agguguy's forearms are a pair of heat rods, these retractable cables deliver a high-voltage electrical shock when they come into contact with an enemy mobile suit, damaging its internal systems and stunning its pilot. The heat rods could also be superheated to give them cutting properties

For close-quarters combat, the Agguguy can also mount a pair of clawed hands similar to the Z'Gok. These claws are extremely sharp, and are capable of piercing the armor of enemy Mobile Suits.

The few Agguguys that were constructed at California Base did not participate in the assault on Jaburo because Zeon Commander Char Aznable discovered a secret entrance to the subterranean base and launched the attack much earlier than originally planned.

After the One Year War ended, a few Agguguys eventually wound up in the hands of civilians at the Tigerbaum colony, and can be seen in the series Mobile Suit Gundam ZZ. 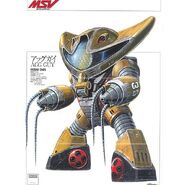 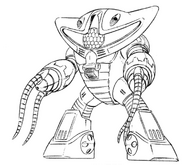 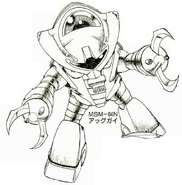 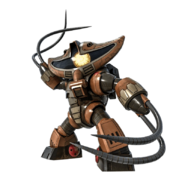 Aggugguy as it appears in Gundam Battle Operation 2 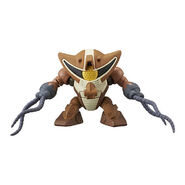