As Zeon prepared for its massive invasion of the Earth Federation Forces' underground military headquarters in Jaburo, located along the Amazon River in South America, the Zeon military engineers at California Base began developing several special operation mobile suits to aid in the assault. The Juaggu was one such machine, created based on the MSM-04 Acguy, its role is that of a rearguard and a mid-range fire support unit for its fellow special operation mobile suits.

The biggest feature of the Juaggu is its elliptical head, which has a movable exhaust heat duct like an elephant's nose. Like the Acguy, the Juaggu is an amphibious mobile suit and can travel underwater using the aquatic propulsion systems in its backpack and feet. The mobile suit also has heavy armor to defend against ballistic attacks during the assault on Jaburo. Its armament consisted of a pair of arm-mounted triple rocket launchers and four mega particle cannons in its torso. When required, the triple rocket launchers can be replaced by the standard 5-finger manipulators.

Years later, during the assault on Dakar in U.C.0096, the Juaggu deployed by the Zeon remnants had revised armaments. The rocket launchers are changed to fire small rockets rapidly and the mega particle cannons are replaced by beam guns. Despite its age, the Juaggu still proved to be a tough opponent for the more modern defending mobile suits.

A 3-tube 320mm rocket launcher is attached to each arm of the Juaggu. The Juaggu deployed by Zeon remnants in U.C.0096 has modified rocket launchers that rapid-fire small rockets which have no problem punching holes in mobile suit's shield or armor. In the hands of a skilled pilot, the triple rocket launchers can be used to smash enemy mobile suit in close combat.

The arm-mounted triple rocket launcher can be swapped out for 5-finger manipulator to perform more delicate tasks and also potentially use melee weapons.

The few Juaggu units that were constructed at California Base did not participate in the assault on Jaburo because Char Aznable discovered a secret entrance to the subterranean base and launched the attack much earlier than originally planned.

In U.C. 0096, one modified Juaggu was deployed by the Zeon Remnants during the attack on Dakar. The Juaggu demonstrated that it was still a deadly unit even against more modern mobile suits, destroying two MSA-003 Nemos before it was taken down by a RGM-86R GM III with support from two RMS-179 GM IIs.

In the manga "Mobile Suit Gundam Unicorn - Bande Dessinee", the attack on Dakar was depicted differently from the anime, with the Juaggu piloted by Yonem Kirks. The mobile suit was later defeated by a RGM-96X Jesta. 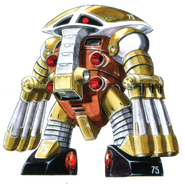 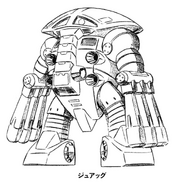 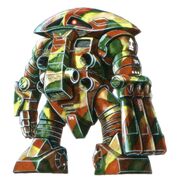 Close up of Zeon Remnant's Juaggu standing beside a fallen Nemo

As seen on Gihren's Greed: Blood of Zeon 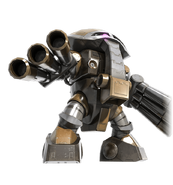 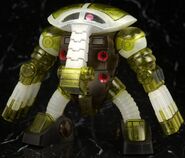