The Principality of Zeon had developed the ground use MS-09 Dom, but its nuclear reactor's output was insufficient for powering mega particle cannons/guns. Increasing the reactor output would require better cooling capacity, and the most efficient method was water cooling. Therefore, in November U.C. 0078, the MIP and Zimmad received orders to develop amphibious MS which can use seawater for cooling. In addition to the use of mega particle weapons, the amphibious MS can reach its destination by traveling through the sea on its own, allowing it to fight in areas away from Zeon's frontline bases.

To reduce water resistance, the Gogg's head became a rounded streamline shape, the MS' equipment was internalized, and the limbs can be retracted when cruising underwater. The Gogg has long operating time in water, and relies on thermonuclear hydrojet engines that draw in water, then heat them with the high heat of the reactor to create thrust. When operating on land, cooling water is stored in internal ballast tank, and the mobile suit's operating time is limited to 1-2 hours. This shortened operating time on land is due to reactor cooling limitations. The Gogg is not an agile machine due to its weight, but its pressure-resistant design provides sufficient defense in close combat.

The Gogg's design proved marginally successful. However, it was only produced in limited numbers and later replaced by more powerful and better designed amphibious mobile suits, such as the MIP's highly successful MSM-07 Z'Gok. Despite this, the Gogg served as a base design from which almost all other underwater combat mobile suits were derived.

The Gogg has a pair of mega particle guns in the center of its torso. Their total weight is 38.7 tons and have an output of 2.8 MW each. This beam weapon does not use energy CAP technology, and the Gogg is the first MS to adopt it.

The Gogg is equipped with a pair of torpedo launchers, one on either side of the mega particle guns.

For close-quarters combat, the Gogg has a pair of large hands with "Iron Nail" claws. These claws are extremely sharp, and are capable of piercing even the RX-78-2 Gundam's Luna Titanium Alloy. Due to the high output of the actuators, the claws can also tear through the thick bottom of an aircraft carrier.

A gelatinous webbing that is launched in a capsule from the Gogg's head while in underwater cruise mode, and covers almost the entire body of the Gogg. The Freezy Yard is used to capture underwater mines without causing them to detonate. This had the effect of reducing detection by sonar, but as the water intake becomes blocked, it could not be used for a long time, and entangled mines had to be removed promptly.

The Gogg was introduced as Zimmad's proposal for an amphibious mobile suit for Zeon's forces after the failure of Zeonic's MSM-01 Zaku Marine Type, and is the first successful amphibious mobile suit. The Gogg was used during the One Year War to help secure Zeon's footholds in the Earth's oceans. Production began in March, and in May it was deployed mainly in the Mediterranean Sea and the Gulf of Mexico.

Although initially successful, the Gogg's technology limited its combat usefulness. Because of this, the Principality of Zeon sought new designs that were more efficient. In the final days of the One Year War, Zimmad and Zeonic both introduced new versions of their respective amphibious mobile suit design. Zimmad developed the MSM-03C Hygogg to solve some of the Gogg's shortcomings. 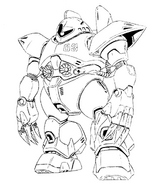 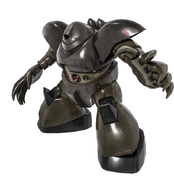 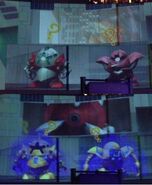