Although the MSM-03 Gogg was one of the first true amphibious mobile suits, it was handicapped by several problems including being under-powered, limited armament, and poor performance on land. To address these shortcomings, the Hygogg was developed. Introduced at the end of the One Year War, this machine was designed from scratch and retained only its predecessor's basic concepts. The result was a smaller, lighter, compact, and more powerful machine equipped with an improved generator and better weaponry. Its agility and mobility in water and on land were also enhanced. Additionally, production costs were reduced due to the implementation of standardized parts, including the cockpit, derived from the United Maintenance Plan, which greatly enhanced repairs and servicing.

The Hygogg's shoulder armor can flip down and its arms can be retracted to assume a streamlined form for improved underwater cruising, while an optional jet pack can be mounted on the back for short aerial mobility. Weapon wise, a pair of 120mm machine cannons are mounted in the waist, four torpedo launchers in the head, vice claws in the forearm, and its primary weapon is a pair of hand-mounted beam cannons similar to the Z'Gok series, allowing for better ranged attack. In U.C. 0096, Hygoggs used by a pirate faction had the beam cannons replaced with a pair of gatling guns.

The beam cannons in the Hygogg's multi-segmented arms use energy capacitor (E-CAP) technology, giving it greater firepower and a much wider firing arc.

In place of the beam cannons, a pair of shell-firing gatling guns can be installed. Used by a pirate faction in U.C. 0096.

Four torpedo launchers are mounted in the head. The torpedoes fired can also function as anti-surface or anti-air missiles.

Mounted in the waist, the pair of rapid-firing machine cannons uses the same live ammunition as the Zaku II's 120mm machine gun.

An optional armament mounted on the arm. Each unit contains a single missile, and has streamlined water-proof panels around it to reduce water resistance when the suit travels underwater. The panels open up when the missile is to be fired, and are blown away when the missile is launched.

Mounted on the forearms, they are improved version of the Gogg's iron nails and can be used as simplified manipulators or as close combat weapons. The arms' new joints improved the vice claws' combat capabilities.

An optional back-mounted booster device used by the Hygogg and MSM-07E Z'Gok-E. This jet pack actually contains a pair of chemical rockets, which the mobile suit uses to launch out of the water and glide to a landing. It is also equipped with a searchlight. The expended jet pack is then detached and discarded.

Only limited numbers of the Hygogg were built towards the end of the One Year War. In December U.C. 0079, Zeon's Cyclops Team special forces used three Hygogg among other mobile suits to attack an Earth Federation Forces Arctic base in an attempt to destroy a prototype mobile suit. The mission failed as the prototype was launched into space before any of the Zeon mobile suits could destroy it. Some Hygogg units would survive the One Year War, and find their way into the hands of various factions in U.C. 0096. They would modify the Hygoggs with different weaponry. 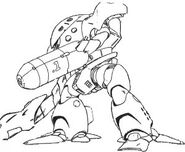 Next to a Federation's C-88 Medea

Close up, with a Hand Missile Unit 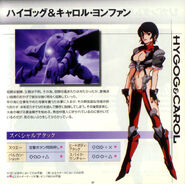 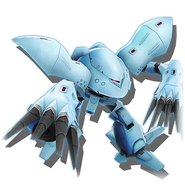 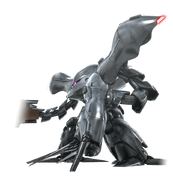 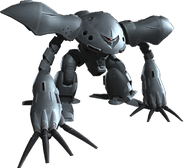 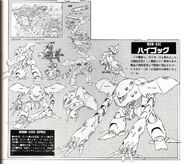