The MSM-02 Hydro Test Type (aka Aqua Experiment Type) is a mobile suit from the Universal Century timeline.

As the One Year War dragged on the Principality of Zeon began to design several different variations of its standard mobile suits to excel in specific mission roles. The Zimmad Company created its first amphibious mobile suit, the MSM-02 Hydro Test Type. It adopts the generator used in the MS-09 Dom and employs a water-cooling system that utilizes seawater. The Hydro Test Type is based on Zeonic Company's MSM-01 Zaku Marine Type and just like it the Hydro Test Type carried weaponry better adapted for aquatic combat, such as several missile launchers and vulcan guns. When the Hydro Test Type equipment is improved its underwater mobility increases 10-20%.

The MSM-02 Hydro Test Type's may be Zimmad's first amphibious mobile suit, but it fails to meet the requirements for an underwater combat suit and its performance on land is also poor. 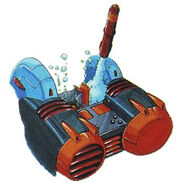 Vulcan Gun Pod
Add a photo to this gallery

Retrieved from "https://gundam.fandom.com/wiki/MSM-02_Hydro_Test_Type?oldid=236340"
Community content is available under CC-BY-SA unless otherwise noted.