The MSK-008 Dijeh (Char Aznable Custom) is a mobile suit from MSV-R: The Return of Johnny Ridden.

A standard MSK-008 Dijeh obtained from Karaba by the reborn Neo Zeon movement led by Char Aznable, it was customized to test the early version of Psycoframe cockpit and had various features to suit the Neo Zeon leader's piloting skills, as well as the development of Neo Zeon's future mobile suit technology. Char's Dijeh features the customary two-tone red coloring scheme, a pair of Gyre Binders from RMS-099B Schuzrum Dias for enhanced mobility and fire power, a pair of Beam Pistols from RMS-099 Rick Dias, its original shoulder shield and weapon racks were replaced by a pair of forearm-mounted shields armed with Sturm Fausts, and it uses a new Beam Machine Gun which would be eventually equipped on AMS-119 Geara Doga.

Mounted in the head, the pair of shell firing weapons have a high-rate of fire, but little power and are generally ineffective against mobile suits. However, they can damage lightly armored areas such as the sensors, and are ideal for shooting down small, lightly armored targets such as missiles or small vehicles.

A beam canon is mounted at the tip of each Gyre Binder. With a maximum output of 4.2MW, the pair of beam cannons are the suit's strongest ranged beam weaponry.

Char's Dijeh has a pair of Beam Pistols, identical to the ones used by RMS-099 Rick Dias, as its primary ranged beam weapon. Despite its compact size, it was powerful enough to destroy an enemy mobile suit with a single shot. The Beam Pistols were stored on a storage rack on the Dijeh's backpack when not in use, and while stowed, they could fire directly with a limited firing arc.

Char's Dijeh can use a beam machine gun that will eventually become the standard firearm of the AMS-119 Geara Doga. It is powered by a replaceable e-pac.

Char's Dijeh is equipped with a pair shields, one mounted on each forearm. Each shield mounts four Sturm Fausts.

The Psycoframe is a technology that builds the brainwave-to-machine code translator known as Psycommu into the atom-level of the metal frame of a Mobile Suit. This allows a Newtype pilot to control the mobile suit as if it were his/her own body.

The Dijeh (Char Aznable Custom) was created sometime before U.C. 0090 as a test-bed for the Psycommu cockpit. It was stationed on the Rewloola-class Rewloola, and Arlette Almage was in charge of maintaining it. The machine showed its superior performance when Char used it to engage former members of Zeon's elite Chimera Corps. 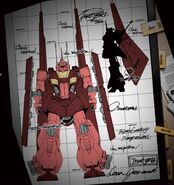 On the cover of MSV-R: The Return of Johnny Ridden (Volume 15)

Retrieved from "https://gundam.fandom.com/wiki/MSK-008_Dijeh_(Char_Aznable_Custom)?oldid=452003"
Community content is available under CC-BY-SA unless otherwise noted.