The MSK-008 Dijeh (ディジェ, Dije?) is a mobile suit that appears in Mobile Suit Zeta Gundam and Mobile Suit Gundam Narrative. During the Gryps War, it was piloted by Amuro Ray.

The Dijeh is a prototype ground-use mobile suit developed by Karaba (hence the 'K' in its model number), the earthbound counterpart of the AEUG, based on the RMS-099 Rick Dias that AEUG left behind after the assault on Jaburo. Karaba put all of its industrial capabilities and technologies supplied by AEUG into building the suit, and although it uses avionics from the AEUG's MSA-003 Nemo, its specifications are far better and worthy of an ace-use machine. Like the Rick Dias, many former Zeon engineers were involved in the Dijeh's development, hence its design has many Zeon-style features, such as the mono-eye sensor. Another similarity with the Rick Dias is that the Dijeh's cockpit is also located in its head.

To adapt to ground operations, the suit's cooling system is improved and lightened. Furthermore, large heat radiator fins are mounted on its back, and the suit can hover over the ground due to the vectoring nozzle type jet thrusters installed in the legs. The suit also features enhanced communication capabilities due to the blade antenna on the head and rod-shaped multi-antennas (also known as radar receivers) mounted on top of the heat radiator fins. Amuro Ray, Karaba's ace and eventual pilot of the Dijeh, participated in the suit's development at the final stage and suggested the weapons rack on the left shoulder. Armament-wise, the suit has a pair of vulcan guns, a beam naginata, a shield on the right shoulder, and uses the beam rifle used by the AEUG's MSN-00100 Hyaku Shiki, as well as the Rick Dias' clay bazooka. It can also use the same hyper mega launcher as the MSZ-006 Zeta Gundam.

In U.C.0097, Luio & Co. operated a number of Dijehs, and their beam rifles are modified to use the same standard E-pac as the beam rifles of RGM-89D Jegan D Type and RGZ-95 ReZEL. Additionally, the commander-use unit has a searchlight on its left shoulder.

Mounted in the Dijeh's head, the pair of 60mm vulcan guns are shell firing weapons with a high-rate of fire, but little power and are generally ineffective against mobile suits. However, they can damage lightly armored areas such as the sensors, and are ideal for shooting down small, lightly armored targets such as missiles or small vehicles. Unique to the Dijeh, the vulcan guns' ammunitions are stored in the suit's back, and fed to the weapon via two exposed tubes.

An articulated shield attached to the right shoulder. As it is not handheld, it has limited defensive angles and directions, but it does has a wide defensive area. Also known as 'Round Shield'.

Like Zeon's MS-14A Gelgoog, the Dijeh carries a twin beam sword, also known as a "Beam Naginata". It has a long handle and a beam emitter at both ends for generating two Naginata-shaped beam blades simultaneously. Alternatively, it can generate only a beam blade on one end, but this blade is thicker. When not in use, the beam naginata is stored on the rear skirt armor.

The standard ranged armament of many mobile suits is the beam rifle, and the particle beam it fires can penetrate almost any armor that has not been treated with specific counter-measures. The Dijeh carried the same model of Beam Rifle as the Hyaku Shiki, with a power rating of 2.8 MW and powered by a replaceable e-pac. It has a retractable hook on top of the barrel for mounting onto the suit's backpack when not in use.

The Dijeh was equipped with the same model of Clay Bazooka as used by Rick Dias and Hyaku Shiki. It was originally designed to fire adhesive rounds which immobilize enemy machines rather than destroying them outright. However, it could also be loaded with other types of ammunition, including conventional explosive round as well as pellet shot round. The Clay Bazooka has 1 round in its chamber with 7 more rounds in a reloadable magazine. A retractable hook is present on top of the bazooka's barrel for mounting onto the suit's backpack when not in use.

A long-range beam rifle with a high-powered scope, allowing the pilot to hit distant targets with pinpoint accuracy. Sniping is also possible by utilizing a bipod. Used by Jona Bashta in the manga version of Mobile Suit Gundam Narrative.

Installed on Dijeh's left shoulder for carrying large firearms such as Hyper Mega Launcher.[1][2][3][4] It was said that Amuro Ray proposed this equipment as he wanted to test various weaponry.[3][4]

During the Gryps Conflict in U.C.0087, the Dijeh was assigned to One Year War veteran and Karaba ace pilot Amuro Ray. The Dijeh's operating data was used in the development of the MSA-099-2 Rick Dias II.

10 years later in U.C.0097, a team of Luio & Co.'s Dijehs with modified beam rifles was led by Michele Luio to capture Martha Vist Carbine. Despite being relatively antique compared to the escort MS team - which consists of several RAS-96 Ankshas, FD-03 Gustav Karls, and RGM-89D-ESC Jegan Type D Escort Types - the element of surprise and the Dijeh pilots' skill overwhelmed most of them.[5]

In the manga version of Gundam Narrative, the Dijehs operated by Luio & Co. had their serial numbers removed prior to sortieing to make them untraceable.[6]

Close up with Quattro Bajeena 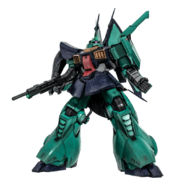 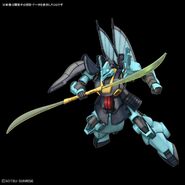 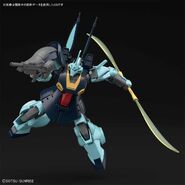 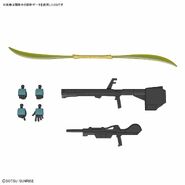 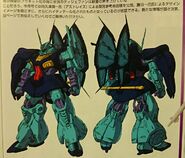 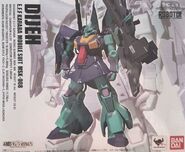 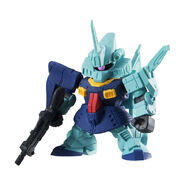