The MSK-00R Rick Dijeh is a mobile suit from the manga Mobile Suit Moon Gundam.

Developed from the MSK-008 Dijeh, the Rick Dijeh is a high performance space-use mobile suit assigned by the top brass of the newly formed elite unit Londo Bell to the organization's ace pilot, Amuro Ray. This is because the main mobile suit currently used by the Earth Federation Forces, the RGM-86R GM III, is judged to be unable to draw out Amuro's full potential. The Rick Dijeh features a redesigned cockpit located in the upper chest instead of the head, and the distinctive large Radiator Fins have been scaled down and made of a different material better suited for space-use. Additionally, a pair of binders derived from RMS-099 Rick Dias's Booster Binders are added to the back. The suit's weaponry is almost identical to the original, though a new shield has been added to the left shoulder. The distinctive beige and red color scheme of Amuro's unit originated from the MSZ-006A1 Zeta Plus A1.

A pair of shell-firing weapon built into the head. Though not powerful, its high rate of fire meant it was employed to intercept incoming missiles, etc. As the Rick Dijeh's cockpit boarding and disembarking system has been changed from the head to the chest, this extra space has allowed an increase in ammunition capacity compared to it's predecessor.

Like the original Dijeh, the Rick Dijeh carries a Beam Naginata, sometimes referred to as a "Twin Beam Sword". It has a long handle and a beam emitter at both ends for generating two Naginata-shaped beam blades simultaneously. It can also generate only a beam blade on one end, but this blade is thicker. When not in use the Beam Naginata is stored on the rear skirt armor.

The standard ranged armament of many mobile suits is the beam rifle, and the particle beam it fires can penetrate almost any armor that has not been treated with specific counter-measures. The Rick Dijeh carried the same Beam Rifle as the Dijeh, with a power rating of 2.8 MW and powered by a replaceable e-pac. It has a retractable hook on top of the barrel for mounting onto the suit's backpack when not in use.

Like the Dijeh, the Rick Dijeh can use the Clay Bazooka. Originally designed to fire adhesive rounds which immobilize enemy machines rather than destroying them outright, the Clay Bazooka could also fire other types of ammunition, including conventional explosive round as well as pellet shot round.

The Rick Dijeh has two shields, one on each shoulder. The shield on the right shoulder is inherited from the Dijeh, while the shield on the left is a new addition. The left shoulder shield combines the function of a shield with that of a weapon rack, thus it can carry large firearms such as Hyper Mega Launcher, and also has space for carrying four grenades.

Four grenades can be stored on the underside of the left shoulder shield and can be fired directly.

Developed from the RMS-099 Rick Dias's Booster Binders, the pair of back-mounted binders are a combination of vernier thrusters with propellant tanks. They can function as stabilizers and are capable of Active Mass Balance Auto-Control (AMBAC) like the suit's limbs.

During a Londo Bell operation to mop up Titans remnants in UC 0091, Amuro Ray and his Rick Dijeh encountered the enemy's MRX-013-3 Psycho Gundam Mk-IV G-Doors. The Rick Dijeh's left binder and arm were severed by the G-Doors' psycho plates, but Amuro managed to destroy several psycho plates with the Rick Dijeh's grenades and sacrificed the beam rifle as a distraction to finish off the G-Doors with the beam naginata. The Rick Dijeh's radiator fins and right leg were also damaged in this final rush. It was later repaired and remodeled into the MSK-008R Modified Rick-Dijeh. 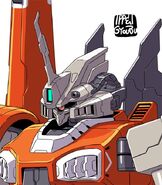 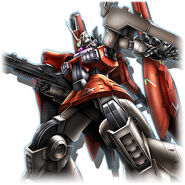