The MSK-008R Modified Rick-Dijeh is a mobile suit from Mobile Suit Moon Gundam.

Following its battle with the MRX-013-3 Psycho Gundam Mk-IV G-Doors, the MSK-008R Rick Dijeh was remodeled and the damage it sustained was repaired. The original parts could not be repaired due to lack of budget and the armor parts and drive system were derived from the RGM-88X Jeddah. The machine's color scheme was changed to black and gray, further increasing its "Gundam-like" appearance [1].

It was equipped with a shield from the RGM-86R GM III to compensate for the reduced ballistic protection. Amuro was familiar with the equipment during his time piloting the RX-78-2 Gundam and it allowed him to use combat actions which he specialized in, such as throwing the shield at the enemy[1].

The standard close range armament for many mobile suits, the beam saber is a small device held in the mobile suit's hands when operated and is powered by a rechargeable energy capacitor. It emits a blade of plasma contained by an I-Field and can cut through most armor not treated with anti-beam coating. The Modified Rick Dijeh carries two beam sabers.

Like its predecessor, the Modified Rick Dijeh carries a Beam Naginata, sometimes referred to as a "Twin Beam Sword". It has a long handle and a beam emitter at both ends for generating two Naginata-shaped beam blades simultaneously. It can also generate only a beam blade on one end, but this blade is thicker. When not in use the Beam Naginata is stored on the rear skirt armor.

The standard ranged armament of many mobile suits is the beam rifle, and the particle beam it fires can penetrate mist armor not treated with specific counter-measures. The Modified Rick Dijeh carried the same Beam Rifle as the Rick Dijeh, with a power rating of 2.8 MW and powered by a replaceable e-pac. It has a retractable hook on top of the barrel for mounting onto the suit's backpack when not in use.

A basic defensive armament used by the Federation's GM type MS since the One Year War. Although various improvements have been made over the years, its overall appearance and shape has remained the same.

The same weapon used by the MSZ-006 Zeta Gundam which is the most powerful class of beam weapon used by mobile suits. The Hyper Mega Launcher is a large mega particle cannon with firepower exceeding that of a warship's guns, which draws its power from a built-in thermonuclear reactor.

Like the Rick Dijeh, the Modified Rick Dijeh can use the Clay Bazooka. Originally designed to fire adhesive rounds which immobilize enemy machines rather than destroying them outright, the Clay Bazooka could also fire other types of ammunition, including conventional explosive round as well as pellet shot round.

Inherited from the Rick Dijeh, the pair of back-mounted binders are a combination of vernier thrusters with propellant tanks. They can function as stabilizers and are capable of Active Mass Balance Auto-Control (AMBAC) like the suit's limbs. 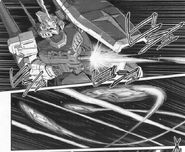