Formally known as "Tieren All Region Trial Type", the Tieren Kyitwo is developed by the ‘Next Generation Technology Development Laboratory’ as a test machine for the HRL’s next mainstay MS, the MSJ-07.[1][2][3] It is created based on the MSJ-06II-A Tieren Ground Type, MSJ-06II-E Tieren Space Type, and MSJ-06II-C/B Tieren High Mobility Type B.[4] As implied by its formal name, the Tieren Kyitwo’s main feature is its ability to operate in varied environments, such as on land and in space, without changing equipment.[1][3][5] This is a revolutionary design that not even Union or AEU have attempted.[1][6]

Despite its weight and bulkiness, the Tieren Kyitwo has surprisingly highly mobility and agility both on earth and in space due to numerous thrusters on its legs, hips and shoulders.[2][5] It is also capable of hovering at high speed while on land like the Tieren High Mobility Type B, and can evade multiple attacks from the enemy at extreme close range.[5] The two tanks mounted on the large shoulders contain water that serves as the suit’s propellant, similar to the leg-mounted tanks on the Tieren Space Type.[2][6] The Tieren Kyitwo also has a multi sensor on its head, and the disc-shape device on its back is a microwave power receiver antenna, presumably for recharging its battery via microwave transmission from an external source.[1][6]

The Tieren Kyitwo’s chest protrudes out greatly as it contains a two-seater cockpit for the suit’s co-pilots, Leonard Fiennes and Delphine Bedelia.[1][2][6] This cockpit has a unique arrangement whereby the front seat has a panoramic display system, while the rear seat has the standard HRL head-mounted display system that projects images and data directly onto the pilot’s retina.[2][6][7] This setup is because the front seat belongs to Leonard, a Super Soldier (a type of enhanced human secretly created by HRL), and the panoramic display makes best use of his enhanced information processing abilities, and to match this, his pilot suit’s helmet has a transparent visor.[7][8][9] On the other hand, Delphine is a normal human and so she uses the standard system.[7][10] During combat, Leonard maneuvers the MS and gives the shooting order after analyzing real-time combat data, while Delphine has command of the operation in addition to pulling the trigger.[7][8][9]

The main weapon of Tieren Kyitwo is the 500mm Multistep Acceleration Gun, a powerful weapon with a muzzle velocity several times that of other guns or cannons, and capable of destroying a AEU-05/00 Hellion Medium in one shot.[2][6][8] Other weapons include the smoothbore gun used by the Tieren Space Type, and two different types of 30mm machine guns on the chest.[1][6] Before the Tieren Kyitwo’s data is used for developing the MSJ-07, it is used to create the Super Soldier use MSJ-06II-SP Tieren Taozi.[1][2][6] This makes the Tieren Kyitwo a Proto-Taozi in some ways.[2] Development of the MSJ-07 is later cancelled following the appearance of Celestial Being’s Gundams.[1]

The Tieren Kyitwo’s main and strongest weapon, located on the right, this huge smoothbore gun is so heavy that the suit’s hand cannot support it, so its rear section is flexibly mounted on the suit’s rear waist armor.[2][6][8] The gun’s projectile is injected with liquefied propellants sequentially in a special chamber, and then ignited in the corresponding order to accelerate it in stages, resulting in a muzzle velocity several times that of other guns or cannons.[2][6][8]

Although the muzzle velocity is inferior to those of a beam weapon, it is still much faster than the evasion speed of the human reflexes.[8] Matching its speed, the gun also has high destructive power and can destroy a Hellion Medium in one shot.[8] However, it cannot penetrate a Gundam’s armor, but a direct hit can badly rattle the suit, damaging some of its fragile internal components and knocking the enemy pilot unconscious.[10] A foldable monopod is attached under the gun’s barrel.[2][6]

The same weapon as the Tieren Space Type's, it can be mounted on either forearms.[1][2][6] It rapid-fires 200mm caliber shells and can use various types of ammunition to adapt to a wide range of operations. Two heat sinks are attached to the gun's barrel and can function as blades since they are made of super-hard carbon.

The Tieren Kyitwo has two 30mm machine guns.[1][6] The first is a standard weaponry amongst the Tieren Series and is mounted in the left chest. The second is in the form of a turret located under the protruding chest, resembling the one used by the MSER-04 Anf. Due to its turret form, this second 30mm machine gun has a wider range of attack, but other than this, the two machine guns have similar capabilities and purposes. They are both secondary weapons with small caliber and low attack power, but their rapid fire capability make them suitable for restricting enemy MS movements, anti-air, anti-personnel, and the likes.

The Next Generation Technology Development Laboratory, an organization within the HRL created to developed Tieren's successor machine, assisted in the failed attempt to capture the Super Soldier escapee, Test Subject E-057. The HRL’s attempt was thwarted due to the Celestial Being’s intervention, and two mobile suit pilots belonging to the laboratory witnessed the GN-XXX Gundam Rasiel in action. Eyeing the Gundam’s advanced technology, the laboratory set up a trap to capture it and launched the Tieren Kyitwo piloted by First Lieutenant Delphine Bedelia and Second Lieutenant Leonard Fiennes.

Capturing the advanced Gundam would help the Next Generation Technology Development Laboratory gain favor with the HRL’s top brass, and because of this, it did not report back about the mission. As a result, it could only deploy a small force, consisting solely of the Tieren Kyitwo. To compensate, the laboratory’s trap for the Gundam implicated an unknowing Union mobile suit force.

Leonard and Delphine were tracking down the Gundam Rasiel in the Tieren Kyitwo when they met Fon Spaak and his red colored AEU-05/00 Hellion Medium. This encounter was again planned by Fon to lure out the Gundam Rasiel. Based on Leonard's analysis and instructions, Delphine aimed and fired, but Fon easily evaded the Tieren Kyitwo’s attacks. Leonard's calculations were perfect, so Delphine wondered if she was the problem. However, the Tieren Kyitwo had gone through numerous tests and this was never found to be an issue. She concluded that Fon was a very skilled pilot, who had calculated the projectile’s trajectory and based on that, maneuvered his mobile suit to evade the shot.

10 minutes passed since the start of the battle between the Tieren Kyitwo and the Hellion Medium, and the Gundam was nowhere to be seen. Suddenly, the Hellion Medium flew into Tieren Kyitwo’s line of attack, and Delphine shot off its legs. The Tieren Kyitwo then retreated without delivering the final blow. The two pilots had sensed something was amiss, and they were right. Fon though the Gundam was unwilling to appear and fight with two parties who were after it. Thus, if one party was seriously damaged, the Gundam might be more willing to reveal itself. As Fon watched the Tieren Kyitwo’s retreat, he praised the enemy pilots for being smart.

In a research facility, a mock battle was ongoing between Tieren Kyitwo and enslaved AEU Hellion Initiums. Inside Tieren Kyitwo, Leonard gave the shooting timing, and Delphine pulled the trigger, 'shooting down' the AEU Hellion Initium. The AEU Hellion Initium that was 'hit' landed, reregistered as a new unit and reentered the battle. An hour passed since the battle began and 15 AEU Hellion Initiums had been 'shot down'. Delphine proposed the battle as she was unsettled by what Leonard had said during their second encounter with Test Subject E-57, that she would be hurt emotionally if she shot and killed someone. She wondered if she could continue with the mock battle because lives aren't at stake. So far, Delphine had never shot down an enemy unit in battle and thought it was because the opponents were too strong.

However, it now seems Leonard had deliberately caused the attack to miss as he did not want her to kill anyone, and had done so without her noticing. He could have slightly mistimed the attack, or move the Tieren Kyitwo a little when it fired its weapon. Although young, Leonard was a super soldier and all these were within his capabilities. In the mock battle, Delphine managed to hit the targets, something she had never done in real combat, and she realized it was because of Leonard. She always knew that Leonard was kind hearted, something a soldier should not be, and she now accepted this fact about him. The problem was whether she could kill people, and she needed to find the answer to this question soon or it will eventually cost them their lives.

Tieren Kyitwo arrived at the designated location. Leonard and Delphine were asked to come here by Grave Violento, the Gundam Rasiel's pilot. Although this could be a trap, they could not refuse. Gundam Rasiel and the GN Sefer appeared, and as a precaution, the Tieren Kyitwo and Rasiel aimed their weapons at each other. However, no one fired. In the Tieren Kyitwo's cockpit, Delphine was about to pull the trigger unconsciously, but was stopped by Leonard, who sensed that something was different about the Gundam and its pilot.

Through the Tieren Kyitwo’s external speakers, Leonard asked for the reason behind this meeting. Grave explained that he wanted to prove to his organization that the two pilots aren't a threat. The battle then began, Rasiel pulled back and Delphine missed her chance to attack as it occurred too fast. Leonard wanted her to give him control of the Tieren Kyitwo, promising to giver her the shooting time. He was willing to do so as their attacks would not penetrate the Gundam's tough armor, a direct hit would only knock the pilot unconscious. Delphine felt ashamed that she was allowed to fight simply because the enemy could not be killed no matter what she do. However, she still accepts it as it allowed her to vent her angst. The Tieren Kyitwo attacked with its 500mm Multistep Acceleration Gun, the gun’s projectile penetrated through one of the GN Sefer’s GN Proto Bits, but was deflected by the second GN Proto Bit that was positioned at an angle. A beam shot from the Rasiel’s GN Beam Rifle then disabled the Tieren Kyitwo.

As Grave retreated, he requested Celestial Being’s supercomputer, Veda, to analyse the battle and puts forth his objections. Back in the base, Grave was informed that his kill order was cancelled. The battle had demonstrated the Tieren Kyitwo’s pilots were not a threat. The fact that Tieren Kyitwo was not sent to the nearest HRL base for repair proved they would not leak news about Celestial Being

2314 AD. Leonard, now a member of the Fereshte, investigated the ELS fragments that landed on Earth. Using the GN-007/AL Arios Gundam Ascalon, he destroyed an ELS that took on the form of a large plane. During the battle, part of the ELS silently attached to the Gundam and slowly assimilated with it. Leonard ejected from the Gundam when the assimilation reached a critical stage. The assimilated Gundam was then temporarily incapacitated by Lars Grise using a bazooka. While Leonard was discussing with Lars on how to destroy the assimilated Gundam, Delphine, who also joined Fereshte, appeared and said there was a machine they could use. Elsewhere, Hayana followed Delphine’s orders and recovered the Tieren Kyitwo from an abandoned base that was used by the Next Generation Technology Development Laboratory. 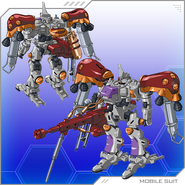 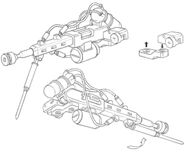 Head, Chest, Shoulder and Back details