The MSJ-06III-A Tieren All Region Type is a mobile suit developed from the MSJ-06II-SP Tieren Taozi that appears in the second season of Mobile Suit Gundam 00 anime series and is piloted by Sergei Smirnov.

Development of the MSJ-07, the next generation successor machine to the Human Reform League's Tieren Series, was dropped in an era marked by events such as the appearance of the Gundams, the introduction of the GN Drive Tau and the formation of the Earth Sphere Federation.[1][2][3][4] However, a few preproduction machines were completed in the form of the Tieren All Region Type and deployed for combat.[1][2][3][5] The Tieren All Region Type is a normal pilot use version of the Super Soldier use MSJ-06II-SP Tieren Taozi, which is developed based on the prototype of the MSJ-07.[1][2][3][5]

As suggested by its name, the Tieren All Region Type can operate in various environments such as on the ground and in space without changing equipment.[1][2] Compared to other normal Tieren units, this machine has remarkable mobility due to various thrusters installed throughout its body as well as the large, thrust-deflection type thrusters mounted on the movable shoulder armor and legs.[1] It can also fly and stay afloat in the atmosphere under its own power.[6] The Tieren Taozi's panoramic holographic display is seemingly tuned for use by normal pilots with this mobile suit, but it is unclear if this system was adopted in other Tieren series units, replacing the head-mounted display.[6][7][8]

Sergei Smirnov's unit is customized for his use and also known as "Sergei's Tieren Taozi".[1][2][4] It can use a new beam rifle whereby the control is largely dependent on the pilot’s skills.[1][2] The mobile suit also has a chest-mounted machine gun commonly found on the Tieren series and can optionally equip the same smoothbore gun as the Tieren Taozi.[1][2][4] It is worth noting that calling the machine "Taozi" or "Tieren Taozi" is incorrect, but former HRL personnel persisted on calling it that due to its strong resemblance to the Super Soldier-use mobile suit.[7][1][2]

This model of beam rifle is also known as 'Dedicated Beam Rifle for Non-Solar Reactor Mounted Unit' and is used by mobile suits without any form of GN Drive.[1][4] The GN Particles stored within the rifle's large GN Condenser served as the weapon's energy source.[1][4] Besides functioning as a rifle, it can also emit a beam saber from under its barrel.[1][4] Originally, control from the mobile suit's OS is necessary for the use of beam weaponry, and it is very difficult to adjust a mobile suit OS without such a system into a compatible type.[1] Thus, the pilot has to completely control this weapon using the optical sensors.[1] As such, highly skilled pilots like Sergei is needed for its use.[1]

A basic armament shared amongst the Tieren series. It is built into the left chest and fires live rounds.[1] Despite having a low attack power due to its small caliber, its rapid fire capability means that it is suitable for anti-personal, anti-air purpose and the likes.[1] Additionally, although it cannot damage enemy units during mobile suit combat, it can still restrict enemy's movements.[1]

An optional armament, it is the same forearm-mounted weapon as used by the Tieren Taozi.[1] It rapid-fires 200mm live rounds and can use various types of ammunitions to adapt to a wide range of operations.[1] Two heat sinks are attached to the gun's barrel and can function as blades since they are made of super-hard carbon.[1] Although its firepower is lower than the Tieren All Region Type's beam rifle, it is very easy to operate.[1]

In AD 2312, Sergei Smirnov entered the AEU's Orbital Elevator, La Tour, using his Tieren All Region Type in attempt to end its seizure by the ESF Coup d'état faction. When the elevator was hit by a blast from the second Memento Mori, Sergei escaped in his mobile suit and then helped shot down the falling pieces of the elevator's outer wall. After the crisis was averted, Sergei's son, Andrei Smirnov, killed him in a fit of rage with the GNX-609T GN-XIII's GN Beam Saber after mistaking him for being a part of the Coup faction.[7][6]

Escaping from the collapsing Orbital Elevator during the Break Pillar Incident 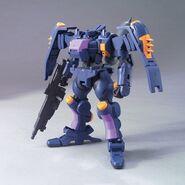