The MSJ-06II-SP Tieren Taozi is the most advanced Tieren series mobile suit in season 1 of Mobile Suit Gundam 00. It is piloted by Soma Peries.

The Tieren Taozi is a special mobile suit designed exclusively for the effective utilization of "Super Soldiers", enhanced humans created by a top-secret Human Reform League (HRL) project.[1][2][3] Based on the MSJ-06YIII-B Tieren Kyitwo, the Tieren Taozi is piloted by Super Soldier Number One, Soma Peries, and has various features and enhancements to match her abilities.[1][4][5][6] As the machine is designed simultaneously with the Super Soldier program, Celestial Being's Allelujah Haptism, another Super Soldier, knows of its existence as well.[1] Also known as the 'Tieren Super Soldier Type', it is regarded as HRL's ace in the hole against the Celestial Being's Gundams and its mobility is shown to surpass the Gundams' in certain circumstances.[6][7][8][9]

This mobile suit's remarkable mobility is due to the large, thrust deflection-type thrusters on the movable shoulder armor and legs, as well as the various thrusters installed throughout its body.[1][2][3][5] It has one water-filled propellant tank instead of the MSJ-06II-E Tieren Space Type's two, and it is mounted on the rear waist rather than on the legs.[5][8] The machine can hover like the MSJ-06II-C/B Tieren High Mobility Type B while on earth, making it a rare unit in the Tieren series that is designed for use both on earth and in space.[1][2][3][10] Its modified head unit has two additional camera eyes at the back (one on top, one on the bottom), improving the mobile suit's data gathering capability, and added armor in front of the cockpit enhances the survival rate of the highly valuable Super Soldier.[8][11]

The Tieren Taozi is adapted to Soma's reaction speed and its cockpit has a high-speed data processing system that gathers information from all its sensors and integrates it into a panoramic holographic display.[1][2][3][11] Also called the 'Full Sensory Projection System', it was installed prior to the Gundam capture operation - the Tieren Taozi's first combat mission.[12] Before that, Soma used the standard Tieren series' head-mounted display during a performance test.[1][6][12] The new display system increases the accuracy of information transmitted to the pilot and allows for faster and more precise mobile suit control.[1][5][8] However, as it exceeds the data processing capability of normal pilots, this system needs to be further developed before it can be deployed in other mobile suits.[1][2][8] Overall, the unique characteristics of Tieren Taozi make it usable only by the Super Soldier.[3][5][8][11]

The Tieren Taozi is armed with the same arm-mounted smoothbore gun and chest-mounted machine gun as the Tieren Space Type, and can use the carbon blade of the MSJ-06II-A Tieren Ground Type.[1][5][8][11] The "SP" in the mobile suit's model number stands for "Super-pilot Type", and as of AD 2307, the Tieren Taozi is the only known mobile suit of its type.[1][3][13] With the termination of the Super Soldier program following Celestial Being's leakage of relevant information to the public, it is unlikely for new mobile suit of this type to be developed.[1][3][14] However, there is a normal pilot use variant known as MSJ-06III-A Tieren All Region Type, but it never entered mass production.[15][16][17] Data of the Tieren Taozi was later utilized in the development of the new Ahead series and its variant deployed in AD 2312.[4][18]

The main weapon of the Tieren Taozi and identical to the one used by the Tieren Space Type.[1] Mounted on the right forearm, it rapid-fires 200mm live rounds and can use various types of ammunitions to adapt to a wide range of operations.[1] Two heat sinks are attached to the gun's barrel and can function as blades since they are made of super-hard carbon.[1]

Like the other standard Tieren units, the Tieren Taozi has a machine gun built into the left chest that fires live rounds.[1] Despite having a low attack power due to its small caliber, its rapid fire capability means that it is suitable for anti-personal, anti-air purpose and the likes.[1] Additionally, although it cannot damage enemy units during mobile suit combat, it can still restrict enemy's movements.[1] While not the Tieren's main weapon, its wide range of applications makes it one of the factors that contributed to the suit's high versatility.[1]

An optional armament for the Tieren Taozi. It is the same close combat weapon as used by the Tieren Ground Type.[1] The carbon blade is katar-like, with a trapezoidal-shaped blade that parallels the grip. Made of super-hard carbon, the weapon takes advantage of the mobile suit's power and heavy weight to smash/shatter the target, rather than cut/slice it. Even if the carbon blade is blocked by the opponent's shield, the blow can still be used to completely throw the opponent off balance. 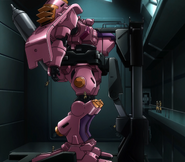 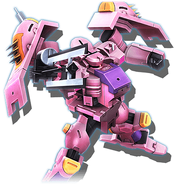