Even after the formation of the Earth Sphere Federation (ESF) to unite the world, attacks on the three Orbital Elevators by terrorists and anti-federation organizations still persisted.[1] On the Heaven's Pillar (aka Tenchū), an Orbital Elevator previously controlled by the Human Reform League, there is a variant of the Tieren Ground Type created specifically for defending the structure and it is known as 'Tieren Zhizhu' ('Zhizhu' is Mandarin Chinese for "Spider").[1][2] Data from the old space-use mobile armor, MAJ-S08 Xiaoshou, was also utilized in the development of the Tieren Zhizhu.[3]

The Tieren Zhizhu moves along the carbon rails on the surface of the Orbital Elevator, and these rails also supply it with abundant electrical energy.[1][2] As a result, its main weapon is a high-output linear cannon not found on other Tieren variants.[1][2] While the rails restricted the movement range of the mobile suit, they do provide for stable movements and ensure high stability when the Tieren Zhizhu is firing its weapon.[1] Furthermore, the energy supply from the Orbital Elevator can be said to be almost endless, thus the Tieren Zhizhu has much better records than the flight-type mobile suits used to defend the other Orbital Elevators.[1][2] As a result, it continues to be operated even as the ESF army is transitioning to GN Drive Tau-powered mobile suit, making it a very special machine.[1]

The normal back-mounted parts of the Tieren Ground Type are omitted in the Tieren Zhizhu, with their functions moved to parts in other body sections.[1] This change is because Tieren Zhizhu's upper body is parallel to the structure during combat, putting its back in close proximity to the Orbital Elevator's wall.[1] Commander-use version of the Tieren Zhizhu has the same squarish head like the commander type of other Tieren variants, such as the MSJ-06II-ET Tieren Space Commander Type, a more protruding center chest block with two sensors on the sides similar to those of the MSJ-06II-LC Tieren Long-Range Cannon Type, and a two-seater cockpit.[4] Besides defense, the Tieren Zhizhu is also used for maintenance of the Orbital Elevator.[1] When carrying out maintenance work and moving along the rails, the suit's upper body swivels 90 degree downwards from its position in combat form, becoming perpendicular to the Orbital Elevator.[1]

The Tieren Zhizhu can also operate on the ground when its moving/maintenance form is fitted with four tires.[1] This ground form is mainly for deployment in the city at the base of the Orbital Elevator, and it can move much faster than a normal bipedal mobile suit on well-maintained roads.[1] The city has dedicated power supply plugs for the Tieren Zhizhu, and although this limits the suit's operating areas, usage of the linear cannon is unaffected.[1]

Mounted on the forearm, this weapon has a high-output as the Tieren Zhizhu receives an almost endless supply of electrical energy from the solar power generation system via the Orbital Elevator’s carbon rails.[1] The linear cannon is highly regarded for its excellent muzzle velocity, rapid-fire capability, and a long effective range.[1]

Mounted on the bottom of the Tieren Zhizhu's pelvis, it is used for anti-air defense and the likes.[1] The chain gun has an excellent rate of fire and can create a dense barrage.[1]

A pair of 6-tube missile pods are mounted on the shoulders.[1] Besides basic missiles, it can also launch other projectiles such as beam disruptors, displaying a variety of uses.[1] After becoming an ESF army unit, the Tieren Zhizhu's missile pods can also be outfitted with special missiles containing GN Particles.[1]

Robert Spacey, a young researcher in mobile suit development history, reluctantly accepted the assignment from the Earth Sphere Federation (ESF) to write an article on Amy Zimbalist's mock battle. Amy, an ace pilot of the ESF army, specifically asked for Robert as he liked what the latter had wrote about him in the book on ace pilots. On the other hand, despite his glowing praise for Amy in the book, Robert personally disliked Amy who was always hitting on Deborah Galiena, whom Robert likes. 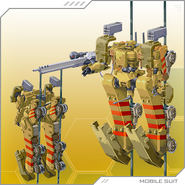 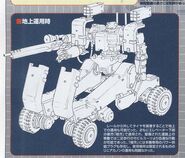 Zoom in of the ground form's profile