A mass production mobile suit used by the Human Reform League (HRL), by A.D. 2307, the Tieren Ground Type has been in service for more than a decade.[1][2][3][4] It underwent several revisions through the years, but its basic structure remains unchanged.[3] This battery driven mobile suit made its debut in the ending stages of the Solar Power Wars, replacing the fossil fuel powered MSJ-04 Fanton.[5][6][7][8] The Tieren Ground Type is considered the standard model of the Tieren series and with its excellent performance, characteristics and high versatility, it is used as the basis for developing other variants, including a space type.[1][6][7] This again sets it apart from the Fanton, which is purely for ground use and has no space variant.[5] There are also a small number of customized Tieren units for ace pilots.[1][3][4]

The Tieren Ground Type has low mobility due to its immense weight and bulk, but in exchange, it has high defensive capability thanks to thick E-Carbon armor and can equip super heavy weaponry.[2][3][4][6] Furthermore, its technology is highly reliable and the machine can be easily maintained.[2][6][7] Its primary weaponry is a shell-firing gun and a carbon blade.[1][3][4] In contrast to other armed forces that are transitioning to beam weaponry, these weapons are comparatively old-fashion, but their simple design makes them easy to produce, extremely reliable, and are highly rated by soldiers in the field.[1][3][4][9] Other weapons of the machine are a small caliber machine gun in its left chest, three shields, and an optional bazooka.[6][9][10] The cockpit of the Tieren Ground Type and its variants is relatively cramped with the pilot controlling the machine in a standing position.[6][7][11] Since operations typically do not last more than an hour, the cockpit's livability is not deem to be so essential.[6] Other armed forces occasionally nickname the machine as "the coffin for the living" as the pilot is said to resemble a dead body ready for transport.[11]

The Tieren Ground Type and its variants share the same standardized control system, thus the HRL's pilots can easily adapt to the different models.[2][4][12] The cockpit of the Tieren series usually have no monitors, external images and data are transmitted to the pilot's helmet goggle and projected directly onto the pilot's retina.[2][4][7][12] Additionally, various commands can be input via slight movements of the eyeballs and head.[4][6][12] Thus, the pilot's face is fully concealed by the helmet, which also has a cable at the mouth section for data exchange between the pilot and the computer.[4][6][7][12] On a related note, the Super Soldier use MSJ-06II-SP Tieren Taozi's cockpit has a high-speed data processing system that integrates data from sensors all over the machine's body into a panoramic holographic display, allowing for faster and more precise mobile suit control.[12] However, mobile suit designers felt the data processing capability of normal pilots could not keep up with this system, so it is not employed in the normal Tieren units yet.[12]

While the Tieren Ground Type stayed as the HRL's mainstay mobile suit for over a decade due to its high level of completion, its technology is undeniable older than the Union and AEU's latest mobile suits, the SVMS-01 Union Flag and the AEU-09 AEU Enact respectively.[6][7][9][13] However, this is not a result of inferior development capabilities.[13] Instead of chasing after the latest technology blindly, the HRL's mobile suit development prioritized the merits obtained from long-term operation of the same machine and related technologies.[6][13] This approach resulted in benefits such as more efficient production and maintenance, and has an impact on training time as well as skilfulness of the pilots.[6][13] For example, the Tieren series' breakdown rate is 40% lower and its maintenance takes only 1/5 the time of other blocs' mobile suits.[6][13] Due to these reasons, the HRL prefers to create variants based on existing machines rather than develop a completely new unit.[6] Even so, HRL is in the process of developing a successor to the Tieren series.[3][14]

The alphabet at the end of the Tieren series' model number is an indicator of the mobile suit's type.[15] While many armed forces use abbreviations of the mobile suit type, the HRL labels their mobile suits sequentially from the letter 'A' without regards to their actual typing.[15] The known designations are: A -> ground type, B -> two seater ground type, C -> high mobility type, D -> two seater high mobility type, E -> space type, F -> two seater space type.[15] Additionally, alphabets corresponding to the mobile suit's type are used for special variants. For example: LC -> long-range shooting type (Long-range Cannon Type), SP -> super soldier type (Super-pilot Type).[15] The alphabetical labeling seems to be reset for the new "06III" generation, as the MSJ-06III-A Tieren All Region Type uses the letter 'A' despite not being a ground mobile suit.[14]

With the appearance of the Celestial Being's highly powerful and mobile Gundams, and the United Nation Forces' deployment of the GNX-603T GN-X as a counter, the time has come for the Tieren Ground Type to step down as the HRL's mainstay mobile suit.[3][6] Similarly, the project to develop Tieren series' successor machine is terminated while in the prototype phase.[3] In the aftermath of the Celestial Being's collapse and with the world unifying as one, the Tieren Ground Type, which has retired from the frontline, is still deployed in certain locations in roles such as guard units due to the limited numbers of GN Drive Tau-type mobile suits.[1][3] Moreover, the mobile suit tactics that have matured alongside the usage of the Tieren Ground Type is highly regarded within the UN Forces, and continued to be practiced as part of the forces' doctrine.[3]

Tieren's main weapon that's equipped on its right arm, the smoothbore gun rapid fires 200mm caliber shells.[4][6][10] As indicated by the 'smoothbore' in its name, the gun's barrel lacks rifling and the weapon focuses more on firepower.[6] To adapt to a wide range of operations, the smoothbore gun can use various types of ammunitions, including armor piercing rounds, APFSDS rounds, grenades, anti-air projectiles, flares, rocket assisted projectiles, etc.[4][6][10] In addition, a 12.7mm coaxial machine gun is mounted on the main gun's barrel.[4][6][10] The coaxial machine gun is adjusted so that its bullet trajectory synchronizes with the main gun's at a distance of around 2000 meters.[4][10] Thus, by using the coaxial machine gun, it is possible to know the specific landing point of the bullet, increasing the accuracy of the main gun.[4][10]

A 6-barreled, shell-firing, machine gun built into the left chest.[4][10] Despite having small caliber and a low attack power, its rapid fire capability means that it is suitable for anti-personal, anti-air purpose and the likes.[4][6][10] Additionally, although it cannot damage enemy units during mobile suit combat, it can still restrict enemy's movements.[4][10] While not the Tieren's main weapon, its wide range of applications makes it one of the factors that contributed to the suit's high versatility.[4][10] An external electrical power supply connector is mounted in the right chest.[10]

A weapon that fires 550mm caliber missiles, it is one of the few firearms of the Tieren to have a grip.[10] Commonly referred to as the "Bazooka" among soldiers due to its shape.[10] For ease of use while the Tieren is moving, the bazooka's rear section can slide back and forth based on the type of missile loaded and the firing range.[10] It uses a double column-type magazine that holds 10 missiles.[10] Since the Gundams have the ability to jam radars, the bazooka is not used against them as its missiles are radar guided.[10]

A type of mobile suit-use close combat weapon. The Tieren Ground Type's carbon blade is katar-like, with a trapezoidal-shaped blade that parallels the grip. Made of super-hard carbon, the carbon blade is mounted on the back of the waist when not in use.[4][6][10] The weapon takes advantage of the Tieren's power and heavy weight to smash/shatter the target, rather than cut/slice it.[4][6][10] Even if the carbon blade is blocked by the opponent's shield, the blow can still be used to completely throw the opponent off balance.[4][10]

The Tieren has three shields in total, one on each shoulder and one on the left leg.[6][9] The shoulder-mounted shields are for protecting the arms, and are removed in some variants.[6] The leg-mounted shield, also known as 'Leg Shield', is for protecting the lower body and associated joints.[4][6][10] This is to prevent the Tieren from losing its mobility and becoming a "coffin" due to its immense weight.[4][10] Although only equipped on the left leg, the leg shield can easily turn to the direction of the attack, providing adequate defensive power.[4][10] When the Tieren is shooting in a kneeling position, its body is protected by the leg shield and the smoothbore gun can be placed in the recess at the shield's top surface for stable shooting.[6][10]

The Tieren Ground Type served as the HRL's primary mass production mobile suit in A.D. 2307. In operation for more than ten years, it was also provided to the bloc's allies such as the Tamil Tigers. Despite their excellent qualities, the Tieren Ground Type and its variants were no match for the power of the Celestial Being's Gundams. Ultimately, the Tieren series was retired from the frontlines and replaced by the more advanced GN-X series starting in A.D. 2308. However, they were still deployed in certain limited roles, such as guarding of bases and facilities. The GNX-704T Ahead that debuted in A.D. 2312 was considered to be the successor of the Tieren series and was developed by a team from the HRL that also developed the MSJ-06III-A Tieren All Region Type.[16] By A.D. 2312, some Tieren Ground Types were acquired and deployed by the anti-Federation organization Katharon. 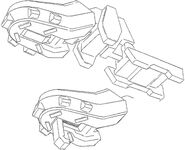 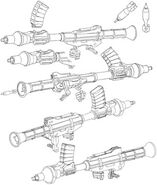 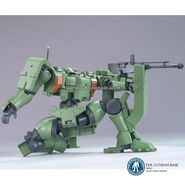 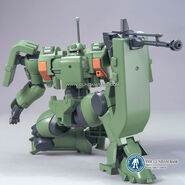 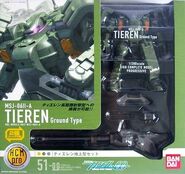