By AD 2307, the mainstay mobile suit of the Human Reform League (HRL), the Tieren Ground Type, has been in use for over a decade and a variety of variants have been developed.[1] The Tieren Antiaircraft Cannon Type is one such variant and it specializes in anti-air combat.[1][2][3] With the mainstay mobile suits of the two other blocs (the Union and the Advanced European Union) being flight type units, it is only natural for the HRL to create an anti-air mobile suit.[1][2][3]

The Tieren Antiaircraft Cannon Type is mainly used for defending the HRL's bases and its orbital elevator.[1][3] It is armed with various anti-air weaponry, including the Quadruple 155mm x 50 Caliber Rapid Fire Anti-Air Cannons on its head, four 4-tube Anti-Air Missile Launcher, and a 60mm 6-barrel Liquid-Cooled Vulcan Gun.[1][2][3] It also has a Composite Search System for detecting airborne enemy units.[1][2] Soldiers on the field prefer to call the mobile suit by its nickname "Ciwei" (which means "Hedgehog" in Mandarin Chinese).[1][2][3]

The Tieren Antiaircraft Cannon Type's main weapon, they fire 720 rounds per minute or 12 rounds per second.[1][2] The muzzle velocity is an impressive 1655 m/s (close to Mach 5), but in return for such high performance, the barrel wears out at a very fast rate.[1][2] Thus, a spare barrel is stored on the rear waist armor.[1][2] The cannons can be loaded with self-guided warheads, anti-air warheads or regular warheads.[1][2] Each type can come with a time fuze (airborne time can be adjusted to set the aerial region), proximity fuze (detonates when it is near the target), or contact fuze, demonstrating a variety of attack patterns.[1][2]

Four such missile launchers are mounted on the sides of the two shoulder shields.[1][2] They are previously loaded with normal missiles, but following the appearance of the Gundams (which render radar and heat detection useless), the missiles are changed to wire-guided type.[1][2]

Mounted on the left forearm, this weapon can be used against both aerial and ground targets.[1][2] It utilizes a liquid cooling system for more effective heat dissipation as the heat produced during rapid fire is far more intense than that of the standard 200mm x 25 caliber smoothbore gun.[1][2] A carbon blade is mounted on the gun's tip.[1][2]

Built into the left chest, it is one of the basic armament shared amongst the Tieren series.[1][2] A 6-barreled, shell-firing weapon, despite having small caliber and a low attack power, its rapid-fire capability means that it is suitable for anti-personal, anti-air purpose and the likes. Additionally, although it cannot damage enemy units during mobile suit combat, it can still restrict enemy's movements.

Like the Tieren Ground Type, the Tieren Antiaircraft Cannon Type has three shields, two on the shoulders and one on the left leg. These shields are similar to those of the Ground Type's.

To ensure the detection of aerial enemy units, the Tieren Antiaircraft Cannon Type has a composite search system on the back of its head.[1][2] The system is composed of various sensors and radars, and can use data collected by unmanned aerial mobile armors.[1][2]

Smoke dischargers are mounted on the sides of the center chest block and on the top surface of the shoulder shields.[4][5]

In AD 2306, the HRL conducted a massive military exercise in preparation for the next year's 10th anniversary of its Orbital Elevator's electricity transmission. As the exercise near its end, a siren suddenly sounded. In the air, four mobile suits resembling the AEU-05 Hellions were spotted. Like the other audiences in the VIP stand, a young Robert Spacey panicked and ran. As he ran to the center of the VIP stand, he met Deborah Galiena, a representative of the United Nations, who told him in a cool and collected manner not to worry as the 'Ciwei' would be deployed soon. As if hearing her words, the Tieren Antiaircraft Cannon Types appeared out of a hanger and their anti-air cannons immediately fired in rapid succession, destroying the enemy units in an instant. An announcement was then made to calm the audience down, and at the same time, Robert heard Deborah muttering to herself that all this was just a show by the HRL.

Sometime after the defeat of Celestial Being in AD 2308, the HRL's Orbital Elevator came under a terrorist attack. A bomb in a luggage bag went off and soon after, three AEU Hellion-type mobile suits operated by terrorists approached the Orbital Elevator for a suicide attack. The HRL quickly deployed the Tieren Antiaircraft Cannon Types, which shot down two of three enemy units, with the last unit destroyed by the GNY-002F Gundam Sadalsuud Type F (piloted by Hixar Fermi) that was hiding in the waters nearby. 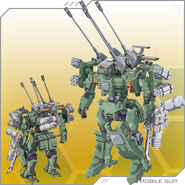 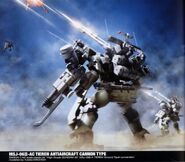