A mass production mobile suit manufactured and used by the Human Reform League (HRL) in AD 2290s, the Fanton serves as the bloc's main machine during the Solar Power Wars prior to the introduction of the Tieren Ground Type.[1][2][3] Unlike its successor, the Fanton is only for ground combat and has no space use version.[4] The Fanton's basic concept is identical to that of the Tieren as the design philosophy behind HRL's mobile suit is based on further evolution of the battle tanks, featuring high defensive and overwhelming offensive power.[5][6]

The biggest characteristic that set the Fanton apart from the mobile suits of the Union and the AEU is that it weighs more than twice that of the latter.[6] This is a result of pursuing to the limits one of the advantages of a mobile suit: the machine's large size allows for the equipping of heavy armor.[6] Consequently, the Fanton is impervious to and cannot be destroyed by conventional weaponry such as tanks or fighter jets.[6] However, the heavy armor greatly cuts the suit's mobility, which is the Fanton's main flaw.[6]

The large ducts and the protruding exhaust pipe on the suit's back are characteristics of fossil fuel powered mobile suit.[1] The Fanton's engine uses the fossil fuel to generate electricity, which then powers most of the suit's system.[1][4][7] However, some parts like the waist are powered directly by the fossil fuel engine.[1] The suit is armed with a smoothbore cannon under the neck as the height provides certain offensive advantages, a handheld carbon spear to remedy the suit's lack of mobility, and an arm-mounted shield that can be used for both defense and offense.[5][6]

After the introduction of the battery-powered Tieren series during the late stages of the Solar Power Wars, and with the HRL moving away from fossil fuel, the Fanton is retired from service.[3][4][8] However, the suit's production continued with its design modified into the MSER-04 Anf for export and rental.[2][3][7]

Mounted on the Fanton's neck, below the suit's cockpit, this magazine-fed smoothbore gun is the suit's main weapon.[5][9] The gun's high mounting point improves its anti-ground attack capabilities, as well as its effective range and attack radius.[6] Although it has high attack capabilities, it can be quite difficult to use.[9] The gun has various types of ammunitions available for selection to meet operational needs.[5] The suit can carry two spare magazines for the gun on each side skirt armor.[5]

A handheld close combat weapon with a long reach and wide attack radius.[5] It is meant to remedy the suit's lack of mobility and is made of E-Carbon.[3][5][6] Due to its shape, the carbon spear is very suitable for stabbing attacks and the like.[9]

Mounted on the left forearm, it is the suit's main defensive armament.[5] Can also be used as a hand-to-hand combat weapon.[6]

The Fanton is Human Reform League's main ground mobile suit in the Solar Power Wars that occured during the construction of the Orbital Elevator.[5] It is well known for its heavy armor that made it almost indestructible to the conventional weaponry used by the enemies, which included terrorists and middle eastern countries.[6]

Four Fantons were guarding the remains of a town close to the Orbital Elevator that was attacked by terrorists. Celestial Being's Gundam Meister 874 was ordered to destroy them using the GNY-001 Gundam Astraea. The Gundam's beam weaponry easily penetrated the Fantons' heavy armor, and the four units were defeated in 36 seconds. Due to the GN Particles' ability to jam communications, the Fantons could not call for reinforcements. To remove any evidence of the Fantons being destroyed by beam weaponry, explosives were used to obliterated their remains.

After the adoption of the Tieren seres as the Human Reform League's main mobile suit, the Fanton was retired from the frontlines. Its design was then modified and put into production as the MSER-04 Anf for rental and export to other nations.

A customised Fanton Gunpla appearing in Gundam Build Divers Prologue and operated by a member of the 7th Panzer Division. Its most notable feature is a large booster on its rear waist. 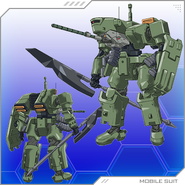 Retrieved from "https://gundam.fandom.com/wiki/MSJ-04_Fanton?oldid=496346"
Community content is available under CC-BY-SA unless otherwise noted.