A mysterious heavily customized Gunpla based on the Gundam Mk-III that suddenly invaded Freddie's mission. It departs greatly from ordinary customization rules, resulting in a strange silhouette with a massive monstrous right arm as the "Seltsam" in its name implies. Besides the huge arm that clearly unbalances it, this bizarre Gunpla also has hidden strengths that far transcend the limits of common sense. Additionally, it is shrouded in a number of mysteries, such as the reason for its demonic strength that is capable of facing the BUILD DiVERS alone, and the identity of its pilot. In any case, it is a fact that it's the greatest threat for Hiroto and his friends.

The Seltsam Arm is a monstrous right arm that gives the Gunpla a devilish impression. It is extremely powerful as its appearance implies and can be further extended by unfolding its frame. It is also designed symmetrically so that it can be attached to the left arm.

A massive lance-like close combat weapon. Its effective range and destructive power are further improved when it's utilized with the Seltsam Arm. A pair of beam guns are built-in for ranged firepower.

A multi-purpose defense weapon connected to the backpack with a flexible arm. It is equipped with a powerful launcher, the Folding Destlauncer.

A Buster Launcher with a foldable barrel and is capable of immense firepower. 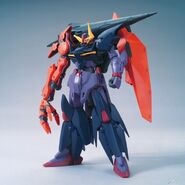 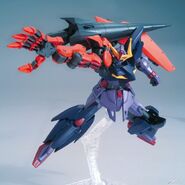 Retrieved from "https://gundam.fandom.com/wiki/MSF-007SS_Gundam_Seltsam?oldid=450975"
Community content is available under CC-BY-SA unless otherwise noted.