The MSB-GH03 Gundam Helios (ガンダムヘリオス, Gandamu Heriosu?) is a Gunpla that appears in the Gundam Breaker Battlogue ONA. It first debuted in Gundam Breaker Mobile.

A high-performance custom Gunpla designed by Ryusei Fudou, the Gundam Helios is the successor of the Gundam Areus. Like its predecessors it is a versatile machine capable of a variety of combat scenarios and fighting styles. Based on the Destiny Gundam, the Gundam F91, and the Gundam X and Double X, the Helios adds new parts like the aeroelastic wings of the ZGMF-X10A Freedom Gundam and Psycho-Frame from the RX-0 Unicorn Gundam. It was given the name Helios due to the brilliant light it emits when its wings and heat radiation fins are all deployed.

Head-mounted vulcans which can deal light damage to opponents.

Four beam vulcans built into the chest below the intakes. Used for direct assault in close quarters, or restricting enemy movement and intimidating enemies at medium range.

A mid-ranged beam rifle based on the high-energy beam rifle used by the Destiny Gundam, it is the Gunpla's primary ranged weapon. Can be stored on the rear waist armor when not in use.

A pair of cannons used by the GX-9900 Gundam X. They are stored between the wings of the Helios when not in use and deploy over the shoulders of the Gunpla. Unlike the Areus, the twin cannons do not receive microwave energy stored from the Voltiere Lumiere system, but they instead draw energy through an unknown method built into the new Freedom-based wings of the Helios.

A pair of powerful plasma beam cannons located in the wings of the Freedom Gundam, which serve to amplify the Gundam Helios' long range capabilities. Due to the inverted placement of the wings, the Balaena deploys upside down, mounted to the hip binders of the Gundam, and usually deployed along with the Double Satellite Cannon.

A large beam sword is stored on the rear end of both back-mounted satellite cannons, in a similar fashion to its predecessor Gundam Artemis and the Gundam Areus. They now serve as the primary melee weapons of the Gundam Helios. It uses energy from the Satellite System and is powerful enough to slice through Mobile Suits in a single blow.

A set of heat radiation fins stored inside the shoulders, arms, and calf armors of the Gundam Helios, similar to the ones used by Gundam F91 and Gundam Double X. These fins unfurl themselves when the Helios prepares to fire the Double Satellite Cannon, and are used to dispel the extra heat generated by firing the cannons.

The wings on the back, the fins on both arms and legs, the Double Satellite Cannons and the Balaeena Plasma Beam Cannons can be unfolded at the same time. The Palma Fiocina Beam Cannons on both palms can also be held out to perform the Mobile Suit's most powerful finisher where all six cannons are fired at once.

Inheriting the similar aerial capabilities as the Freedom, this Gunpla unlocks the utmost potential of extreme mobility, especially in space. When activated, its wings are unfolded for higher maneuverability.

Inherited from the Destiny Gundam and the Gundam Areus, it is combat variant of the Voiture Lumiere system that uses an internal laser to convert energy into a strong light pressure which is then used as thrust. The system generates a light effect known as "Wings of Light" when the wings are unfolded, providing unmatched acceleration and thrust.

Inherited from the Unicorn Gundam's Psycho Frame, it provides a temporary increase in power as the clear green parts of the Helios glow brightly. It is usually activated when the Helios prepares to fire its Sestet Cannon. 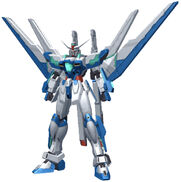 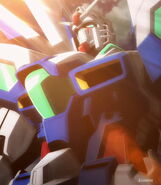 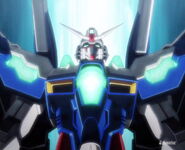 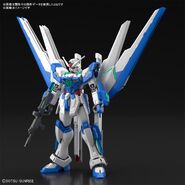 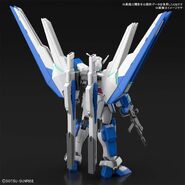 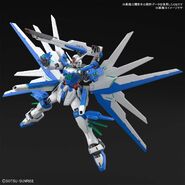 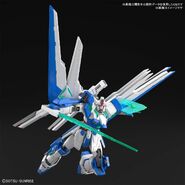